The decision to keep pigs was not as difficult to make as you may think. It was just an assumption by both of us, that with the additional space we would rear pigs. I have always wanted a pet pig and we are both meat eaters; after all who can resist the smell of bacon! 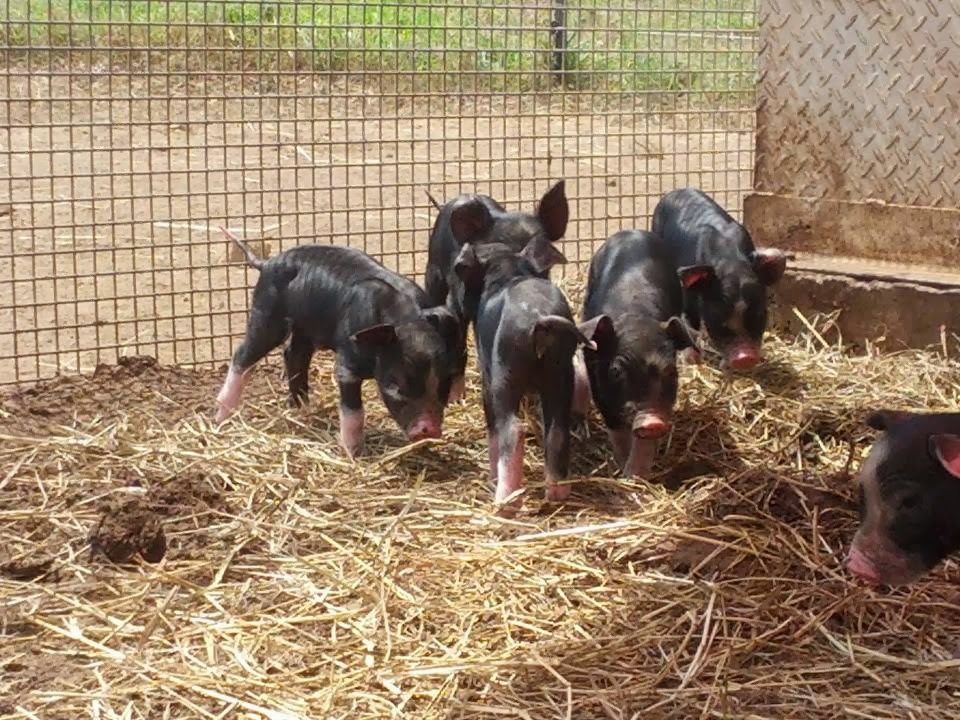 So I guess this was the basis of our decision to keep and breed our own. The decision to breed pigs allowed for us to have a relationship (and no doubt for me an emotional attachment) with our breeding pair. The challenge would be to raise piglets for sale and the freezer. As pigs have multiple births we aim to sell the excess numbers, in the hope that it assists in the costs of raising the few from the litter we keep for ourselves.


Pigs are incredibly intelligent animals and I am afraid I am not a believer in keeping them on concrete or in pens so they cannot move. It is not natural for a pig to eat where it sleeps and goes to the toilet. A pig will naturally separate these environments (so they are deceivingly clean animals; I’m afraid the phrase “as happy as a pig in shit” is greatly misleading; mud on the other hand they are more than happy in. 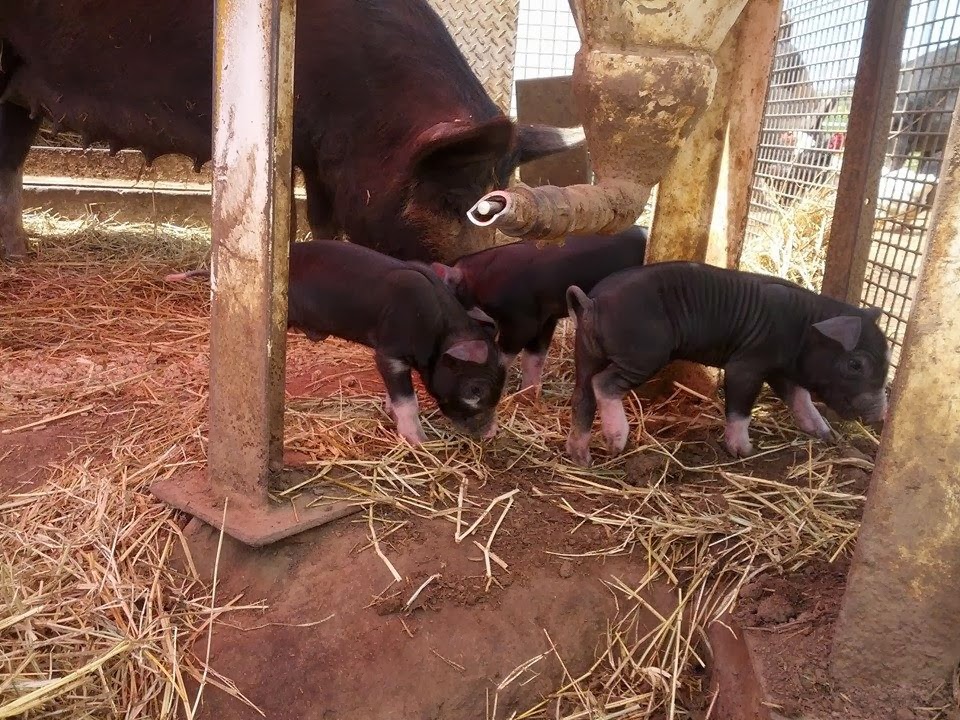 So for our pigs we wanted them to “free range”in the paddock; this was also due to location, it was the furthest point from ours house and any neighbouring buildings- just in case. I use the term Free Range rather loosely, as to be "Free Range" for sale there would be many strict conditions that I am not subject to assessment- as I am not selling my meat. I am using the term in that they are free to range and have access to grazing, be free to run and play and live happy healthy lives- with stimulation and company. They are social animals and should not be kept on their own. Even the pet tea cup pigs kept as household pets tend to bond with other household animals.


Berkshire pigsare “Britain’s oldest Pig Breed” these are an historical breed, originated from around the market-towns in the county of Berkshire (hence the name). Although today the origins of this historic breed are considered to be Oxfordshire (due to moving of County boundaries). 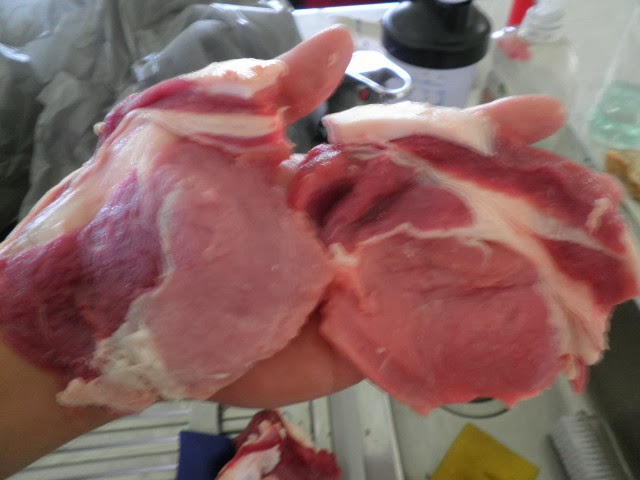 Considered the "wagu of pork", prized for juiciness, flavour and tender pink-hued and heavily marbled meat. It has been reported that this is the only pork the Emperor of Japan will eat (but I’ve only read that somewhere- and I can’t remember where).


Berkshires are great for the Aussie weather as their black skin allows for them to free range without the concern of burning like pink pig breeds. They are happy to graze and their placid (yet curious) nature makes them ideal for a small holding.


Berkshires are now considered a “rare” or“heritage breed” and was listed as “vulnerable” in the 2008 "watch list" by the Rare Breeds Survival Trust (this has been downgraded to "at risk" this year). 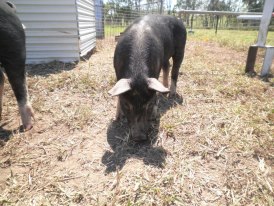 The fall in population was largely through the 1980’s and 90’s with the rise in farm-factory production and the belief that consumers were only interested in leaner meats. Berkshires are not suitable or do not perform as well commercially, as they do not do well in confined spaces and are “slower growing”; great for small holding, but not for the commercial producers, looking for maximum profit. Therefore many producers switched to“more suitable” breeds such as Duroc or Yorkshire etc. (your more distinctive pink pigs).


Distinctive features of a Berkshire are its colouring Black with white “points” (legs, face/nose & tail) and darker skin. Their body is very deep sided with a strong uniform arch back; muscular and solid. Their nose is sometimes described as “dish-shaped” as their nose is slightly up turned, with standing (upright) ears- not flopping over. 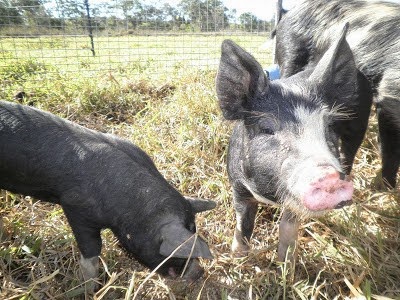 Our original pigs joined us in August 2011. We had purchased a “porker” from Sheree (Mackay free-range pigs) last year. So we knew the quality of the meat and that we could source a breeding pair of this rare breed from local breeders. So Smokey came from http://www.mackayfreerangepigs.com.au/ and Streaky from http://www.beefaloaustralia.com/berkshirepigs when they were about 8 weeks.


They are from different bloodlines, as we hope they will breed and live long and happy (productive) lives.

Our first challenge was to provide housing and a secure environment for such small animals. So for the first few weeks they were sectioned off using mesh panels at night (for fear of what may get in) and allowed them out during the day. We separated an area of the paddock off specifically for them. For our fencing we found electric fencing and barbed wire to be very affective and not overly expensive. This also allows us the ability to section and move their paddock as and when we require. As I mentioned pigs are intelligent and are quick to learn what that white line is for. 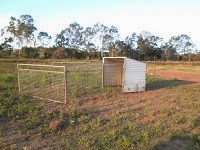 Our first shelter was effective until wet season came, this moveable shelter had until then been great. But it soon became apparent that they needed something more permanent- high and dry. Not that our block was saturated in water, but somewhere they could get out of the moisture and into a warm, dry bed if they wanted.

So we bought a shed and constructed a concrete pad… be warned it will not stay looking new for long- pigs are natural vandals! 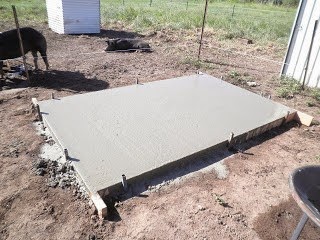 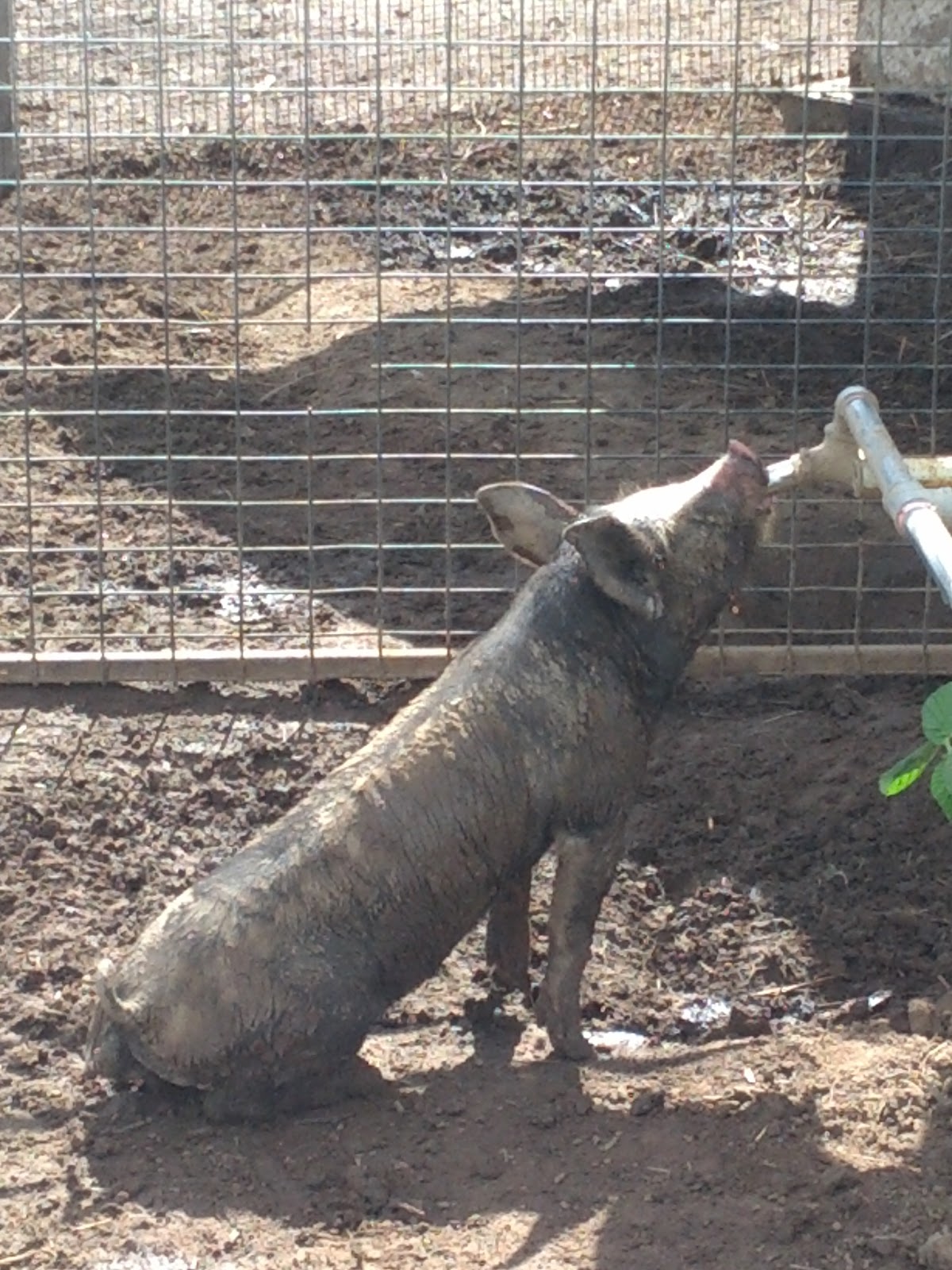 Another problem this created was that pigs love to wallow. Now in the summer months they will do this partially to cool themselves off and the mud also helps protect their skin from the sun. For this reason we found we had to divide their paddock into sections. Allowing some areas time to recuperate following the rain.

One of the most important points I tell anyone who asks about rearing pigs, is that even with a supply of water around them (puddles etc.) pigs will not drink dirty water. So on a hot day they will spill a water trough to roll in and then dehydrate as they do not have access to clean water. (I know I said their intelligent but they will do this). So we converted 2 old “trickle-dusters” (that Matt recycled from work) and purchased drinking nipples. These only release water upon contact. This is very affective- though they will quickly learn how to lean on it and create a small puddle to wallow in, but least they have clean drinking water throughout the day. 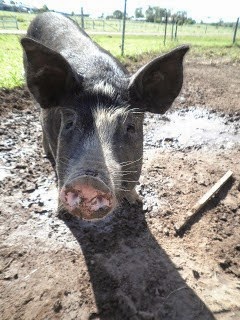 As for food their pretty easy to please; they graze happily on the grass, or at present tomatoes and pumpkins that have seeded in part of their paddock. Scraps from the house; I now keep a lidded bin under the sink for my animal friendly food scraps- by that I mean no blood or bone, these I save for the dogs. Also avocado skins are toxic to everything, and I have read mixed information on banana peels, so I do not feed them these either.


The pigs also get a fair share from the veg patch, as well as supplementing their feed with grain and “pig grower” from a local produce. They also enjoy a protein feed that is available locally which is molasses based; bi-product of the local sugar industry. Is usually used for horses, but our pigs (and birds for that matter) love it.


As for mess, as I have said they will only use an area of their paddock as a toilet, so collecting manure is easy, if you want. As it is a great source of fertiliser for my garden, along with the chook poop and cow manure. But as it is very high in nitrogen, you may wish to store it in bins as a tea or allow to compost down and then use on your veggies 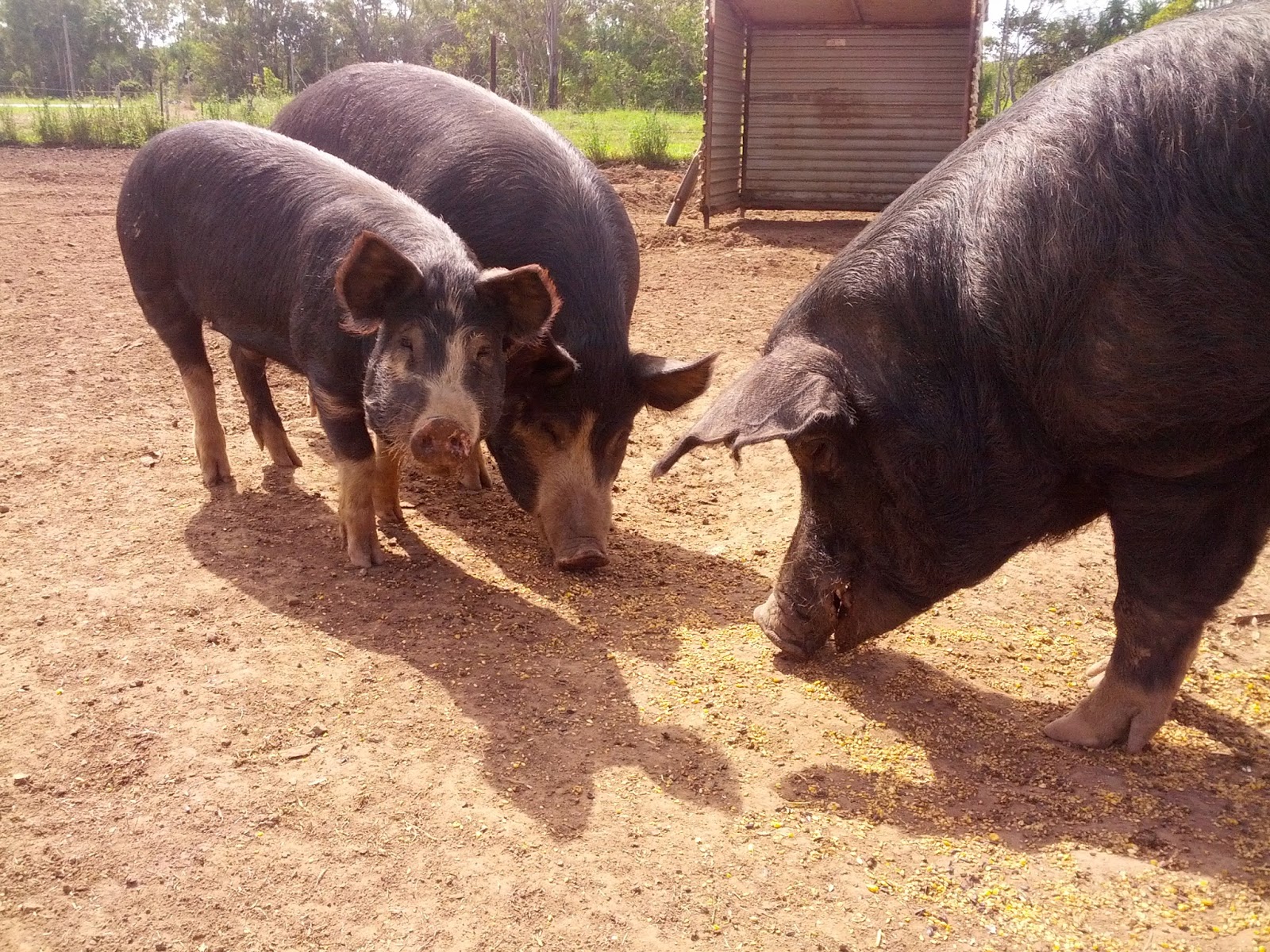