Make your own produce... No farm required

As I mentioned in last weeks post we have been preserving and making a few bits and pieces at home lately... the cooler weather and abundance of produce does that to you.
But you don't need a farm, animal or even a veggie patch  to produce some of your own staples at home.
I often get comments like "I wish I could do more like that" but the fact is you can. Not everyone can rear and butcher a pig, but anyone can grow sprouts on a kitchen counter or make yoghurt. So here are a few recipes and details about some of the make your own things we've made over the last few weeks... and I guarantee they will taste better than anything you can buy. 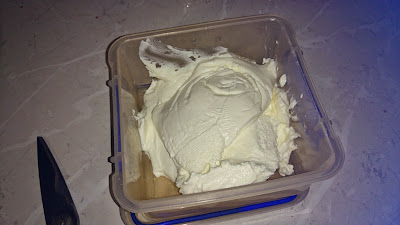 So I first made this 2 years ago, and have never looked back! I use my own ‘starter’ which is basically an unstrained (plain) cup of yoghurt from the previous weeks batch and I use muslin (also known as cooking cloth or cheese cloth) to strain; as this can then be washed and reused.
If you want to try this you don’t need a slow cooker, you can heat the milk on a stove. I just prefer to use mine as it gradually brings the milk to the right temperature; and I know I don’t have to watch it like a hawk in case it over heats. 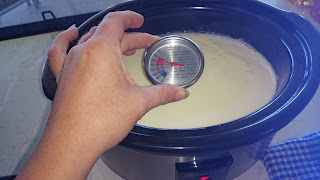 Since this original post I have also tried it with both full fat flavoured yoghurt as a starter and UHT milk, both work fine.  The only real must have is your yoghurt ‘starter’ must have L.Acidophilius and S.Thermophilius in it, as these are the active cultures that curdle the milk, creating your separation of yoghurt and whey.
I would give the tip of use a yoghurt starter that you like the taste of, as it does affect the flavour and consistency of the final product. I have used a creamy vanilla yoghurt as a starter for a batch I made for our little one as it produces a milder flavour. This way I find it easier, or less harsh to flavour- only adding a small amount of honey and/or fruit and vanilla essence and she loves it!

Ricotta cheese
This was a new one for us, I found the recipe on a Facebook post- and now I have made it successfully once I will never buy ricotta again! 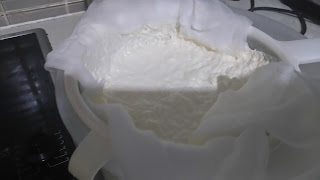 Similar process to that of the yoghurt in that you need to heat the milk to 82°, but then you remove from the heat and simply squeeze and whisk in ½ a lemon, or similar quantity of edible acidic material (vinegar or other citrus fruit; remembering whatever you use will affect the taste of the outcome) and set aside and allow to stand for 10 minutes. Then strain using muslin or cheese cloth.

I used full cream milk for this recipe, though I have seen some add 1/4cup cream per litre of milk. I didn’t think ours needed it, as the result was creamy enough, though I would definitely not advise using lite milk for this process. 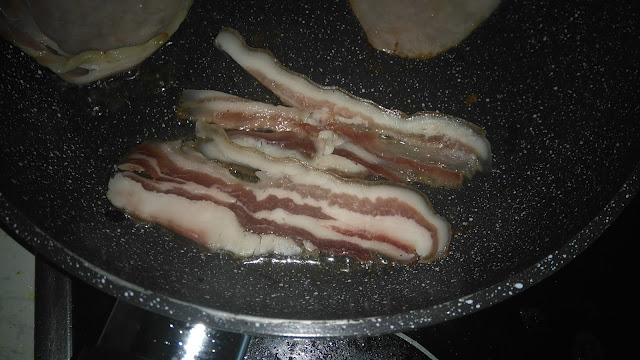 No you don't need to breed your own pigs, or even a cold room to make bacon. Just belly pork,  space in a refrigerator and a few household condiments and spices... and a little time. 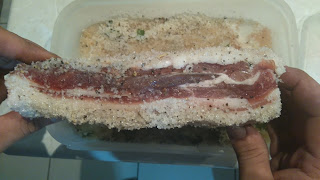 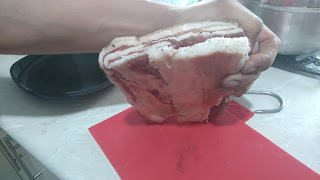 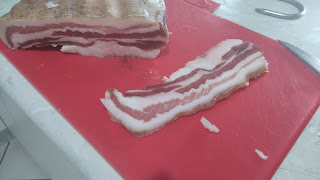 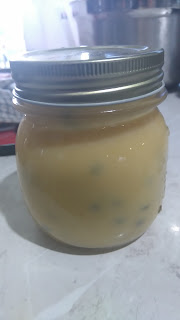 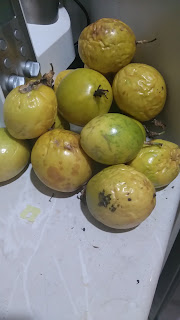 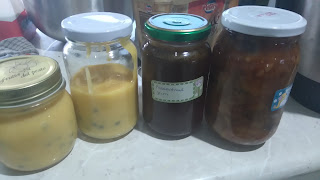 I have always made Passionfruit butter, but as it contains dairy it doesn’t last that long, so making large quantities with a glut of fruit is not practical. So with a little research I found a jam recipe… And it is yummy! (Though I maybe biased) A little more technical (well messy, not technical)

The quantity of sugar required depends on the amount of fruit pulp you have. I used 10, but depending on the size of your fruit or quantity you wish to make you may prefer to use more or less.

Firstly before separating the pulp and husk you need to have a large stock pot ready and a fine sieve and muslin cloth. As you will be separating the fruit, but saving and using each part.

Scoup out the pulp (fruit and seeds) from the husk and strain. I use a fine sieve over a mixing bowl.
Then place the husk/shells in a large pan. Once the juice is strained from the seeds (you may need to assist this process using the back of a spoon and possibly a splash (smallest amount possible) of water. Then place seeds into the muslin cloth and secure. Place bag into the pot along with husks and cover with water.
Place this on a medium heat and allow to boil until the shells become soft and translucent.  Then remove both the husks and the bag from the water (saving the water).
Decant the water into a jug or other measuring device.
Now scoup out any remaining soft flesh from the husk and return to the pan, you may now discard the remaining husk/shell.
Measure and add you fruit juice to the pan. Then add the same amount of saved water and sugar.
Simmer for 20 minutes.
Place in (sterile) jars.
As a test to see whether my jams or marmalades etc. are ready (will set). I generally allow them to cool slightly in the pan. If they begin to develop a ‘skin’ then they will set. If they remain runny I add more sugar (or pectin if necessary) and reheat carefully.
I have tried the ‘spoon’ method, though have been caught out, particularly with soft (low pectin) fruit such as strawberry and mango.
So I prefer to let the batch cool. You can either re-apply heat to spoon into jars. Though I generally find simply stirring the cooler (skin) into the hotter contents below liquefies the jam enough to decant into sterile jars. 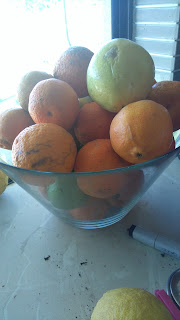 Our fruit trees have been working overtime (since the arrival of our bees). So I decided to use some of the mandarin/oranges and limes to make marmalade. 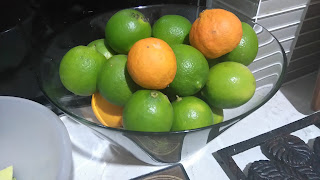 I have made marmalade plenty of times, however I have always juiced the fruit and then sliced the rind first. However I keep seeing recipes where the fruit is boiled whole. So I thought I would try it, as I have read it improves the taste of the rind within the marmalade. Besides the pith and the seeds hold the pectin, so they have to be in the pot one way or another.
This method actually worked out a little less messy and seemed to be quicker. 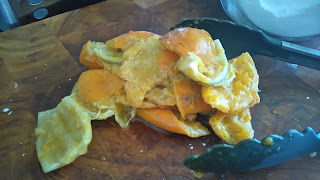 So I halved/ quartered the fruit (depending on the size and placed in a pot and covered with water.
Place on a rolling boil until the fruit is soft.
Once soft I used a potato masher to separate as much of the juice and flesh as possible. Then remove as much of the rind from the mix as I could to slice ready to return to the pot. 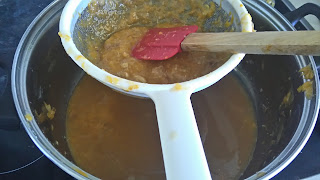 Strain the remaining juice and pectin water to remove any pips; measure this strained liquid, as you will need equal parts liquid and sugar.

Return liquid to the pot with an equal quantity of sugar and the sliced rind. Simmering for approx 20minutes. Decant into sterile jars. 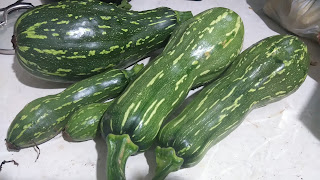 I have made many variations of this over time, though I have to admit if you can get green tomatoes they do produce the best chutney. This time I had a glut of squash- similar to marrows, part of the squash/pumpkin/courgette (zucchini) family. Not exactly sure what variety they are… the vines have either sprouted from where we had the grower pig on the veg patch, or they are finally producing from seeds I sowed last year..??
Either way, they are large and lots of them, so I decided to make some chutney to use them use (along with roasting them, they also make great chips!) 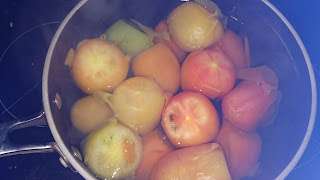 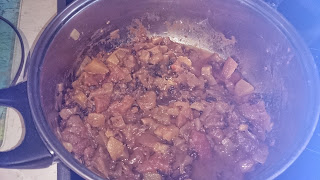 Remove any hard ends or eyes (by chopping end off) then simply drop them into a pan of boiling water for a few minutes; til you see the skins begin to come away from the fruit
First job is to peel your tomatoes- Then remove from the heat and carefully scoop them out (use a slotted spoon) and carefully peel the skin away- You may want to do this over your intended chutney pot… as they can fall apart
Once finished chop all the other ingredients- all to a similar size and add to the pan. (Personally I skin my zucchinis first).
Stir and place on medium heat and bring to boil, and then simmer usually for an hour, stirring regularly.

Remove from heat and place in sterile jars.

It tastes better after a couple of days, but then it should keep for a few months in cool, dark place.