From piglets to pork


So this week brought both a cold snap (well single figures over night- so cold for Queensland), and some ‘early’ arrivals. These events prompted the preparations and processing of more pork for the freezer.   [warning this post does include images of butchery] 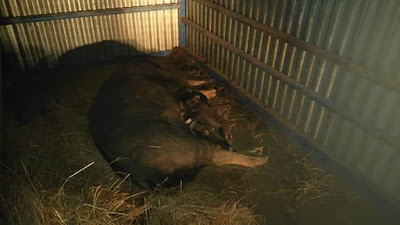 Some may struggle with the idea of considering piglets and pork in the same subject area… others may even consider it perverse. We chose to view it as a true reflection of our responsibility as smallholders and meat eaters; rearing and raising happy, healthy livestock to produce the best quality food we can for our table.
The arrival of our second litter of piglets in as many weeks was not unexpected, though admittedly it did catch us off guard (again). This sow (Rosemary), didn't appear ready the last time either. Not expressing the same physical or behavioural traits as the other girls. She had 'dropped' (a little) a few days ago, but by no way an indication of impending delivery- her stomach was a little lower and enlarged, but her nipples had yet to separate (an indication of her milk coming in), which with or other girls generally occurs 2-4days before delivery. She had made no attempts to nest or 'farrow'- expectant mums tend to prepare a warm and dry area in a secure location in days prior… Again not this one! 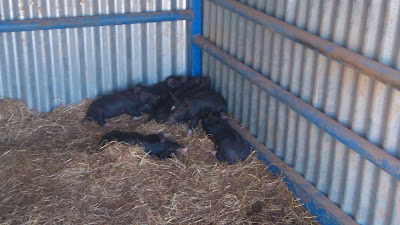 So Tuesday evening along with the excitement of new arrivals came the hurried shuffling around of panels (in the dark, under headlights) to secure the little ones from the rest of the mob (term for a group of pigs). Just in case. Though the big fella was very good with the babies, when Mum came out to join in the feed.  The other sow seemed more interested if anything, though she may have been more interested in the placenta not the actual piglets, as she’s shown very little interest since.
And by separation we do not separate our mums from the babies; known as a farrow stalls. We just temporarily separate the mum, with her babies (what our neighbours refer to as the ‘maternity ward’) using mesh panels to an area in and around one of the sheds; to reduce the risk of any injuries to piglets and to secure them from accidentally wandering- as they could easily fit under the barbed wire fence.
One of the reasons we were so short on panels on this occasion, other than the other sow (Sage) being penned off too; Was that we had used the rest of the panels to enclose the cow shed and yards (temporarily) to house a grower for the last few weeks.  She had been happily grazing on the forest of grass and turning over the yard. However her time had come… and our arrivals escalated the scheduling of these events.
So over the weekend our grower fulfilled her purpose and her temporary enclosure was dismantled and redistributed between the two sows and their litters… for the next generation of growers.

We have covered the topic of home butchering pigs in some detail on here, so I won’t elaborate too much on this occasion.
http://www.maes-y-delyn.com/2015/03/turning-fennel-into-pork.html 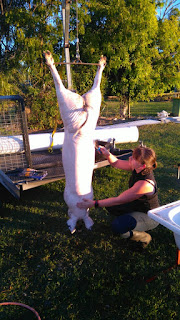 However as a smallholder D-day always comes with mixed emotions (this one especially), and a pressure to ensure you do a good job; clean kill, good scald… 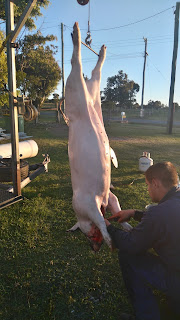 So Friday late afternoon- night was spent processing ready for cutting up on Saturday. We were very happy with the results, the scald went well; only requiring the shaving of some of the more stubborn hairs.
Given the cooler weather we had planned to hang her overnight in the shed. But the forecast suggested it may not be cold enough, so save ruining all our efforts we transferred her to the chest freezer. Unlike many other animals, there is no need to hang pork; though it does need time to rest and cool before you begin dividing into cuts. And you do need the room to actually store it! On this occasion our grower/porker dressed at around 95kg, resulting in over 60kg of meat- each half pictured weighed 30kg. 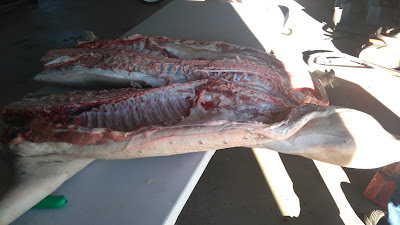