This little piggy... (not necessarily a happy ending)

Being new parents we're regularly reciting nursery rhymes. Only this one didn't quite go to as we'd hoped... as some little piggy's went to market, but ours didn't get to stay at home.

Well there’s the common saying about chickens- “Never count your chickens before they hatch” and I would go one step further to say you cant always count them then. However I definitely think there should be one for piglets and bacon or sausages... and unfortunately on this occasion; we have learned the hard way.

I suppose it maybe considered a law of averages; that the more livestock you breed and rear the more losses you will encounter. And we have experienced losses in the past, with our poultry (not just chickens, in fact chickens are generally hardier), but never with our pigs. 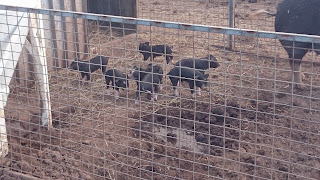 A few weeks ago we welcomed 7 very healthy piglets to our farm. This is our second pure litter, from second time Mum Sage. Although 4th since starting out her, having had 2 litters thanks to our Berkshire- Saddleback cross “Christmas Ham”, who was named as such, as she was only meant to be a ‘porker’ until our breeding plans came to fruition (clearly she was more intelligent and fertile than we gave her credit for). 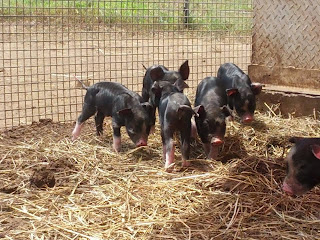 Anyway, having put out for expressions of interest in our impending litter; 6 were sold within a few days of their arrival. (In fact we could have sold a couple a few times over!) We were certain we had counted 3 girls and 3 boys, but we were unsure as to the sex of the 7th. So figured we usually have more males than females (not sure why and sows are easier to off load) therefore the extra male would be ours. 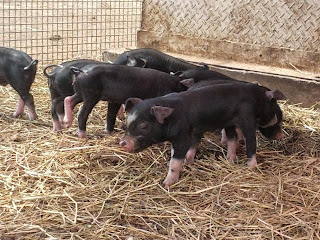 To our surprise the 7th piglet was in fact a sow! We had never managed to keep a sow (that we had bred) for ourselves. In fact we had never sold a litter that early.
Which brings us to the point about not counting your bacon... Two weeks in, we were devastated to find a piglet dead in the shed. Now I understand its a law of averages that the more you breed something, the more likely you are to encounter loss. But these had been fit and healthy little piggy's.

I guess we had expected any losses (if at all) to be during the first week or so. We had put our non-fatality success (to date) down to the breed being slower growing (and therefore the sows themselves being smaller) and the girls (passed and present) producing smaller litters; only ever having 5-8 at any one time. As the most common loss we hear of is the sow rolling onto the piglets- which is why commercial practices use sow stalls.

This little one was 2 weeks old and until then had been a happy and healthy piglet. Only when we went down for the afternoon feed we found her in the shed, away from the rest of the litter. She appeared to be asleep, head leaning on its front trotters, but not waking up. We can only put it down to the possibility that she took an instant blow to the head. [Given her injuries (to her jaw/teeth) and position]. Possibly in the wrong place at the wrong time when Mum got up? Hopefully it was at least a quick death, though none the less upsetting. Even Mum gave us a knowing look when we got into the pen/shed to retrieve the piglet. Whereas their usual instinct would be to ward you from their young.

So we will not be keeping one ourselves from this litter...  so never count your bacon/sausages, even once their born. 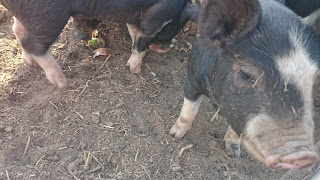 As for the rest of the litter, they growing well. Eating solids and drinking from thee waterer (as well as Mum) and running and playing like happy, healthy little piglets. Who will be leaving us for their new homes in a little over a week. And then Sage can return to her man. 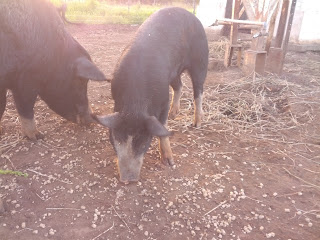 Which should definitely cheer up Smokey (our boar). Pigs are very social animals and he has been mopy without his companion. Spending most of the day and every night beside the farrowing pen. Its only really the heat of the day that he retreats to the other shelter. But not always, even then. If she's inside with her litter you can sometimes find him laying in the shade behind her shed.
Posted by maesydelyn.qld@gmail.com at 11:38:00 am No comments:

If you were to visit Maes-y-Delyn at the moment it would be fair to say spring is definitely in the air, given the new arrivals. Our own included.


I guess we should begin by apologising for our absence. As it's been a while since our last post.
An absence probably felt by our farm too. Well not exactly an absence from the farm, but you could say we have been a little distracted. As we recently welcomed our own little addition. So have been a little busy adjusting to our new roles as parents, whilst balancing our responsibilities here. We also had a few weeks with some rather proud grandparents staying. 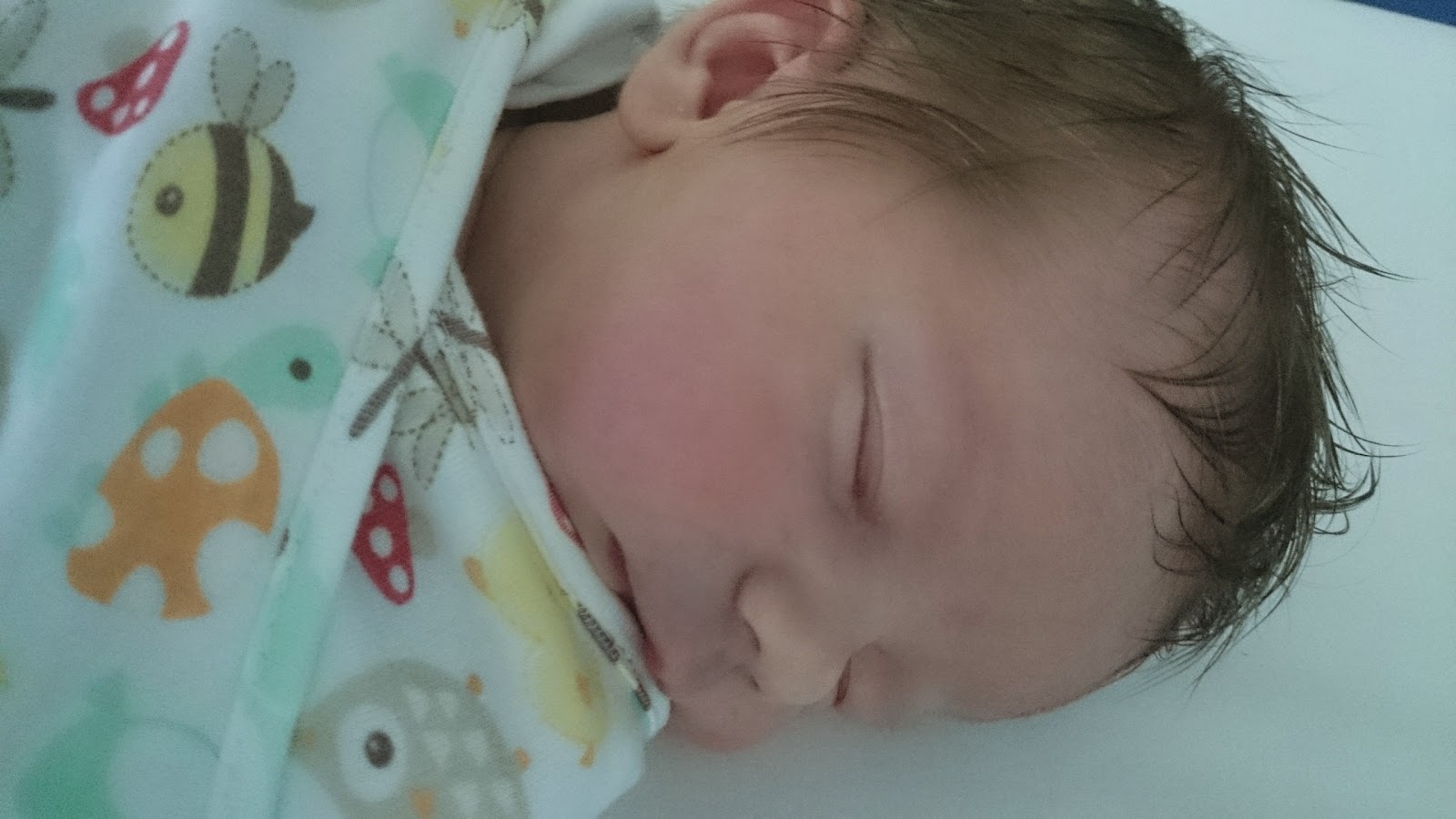 For those who know us personally, we would appreciate it if  you do not refer to or daughter by name in any open /online interactions. As I am conscious that this blog is on the open web.

So 'Miss A' or 'the cub' and parents are doing very well.

So these exciting events followed by a few technical issues (those who follow us on Facebook would know I have been posting from my phone) and trying to fit in time actually sit down and write has meant a fair gap since our last post. And a lot has happened, we are not the only new parents here.

Since our last post we had welcomed a number of chick (particularly a few Indian Games). 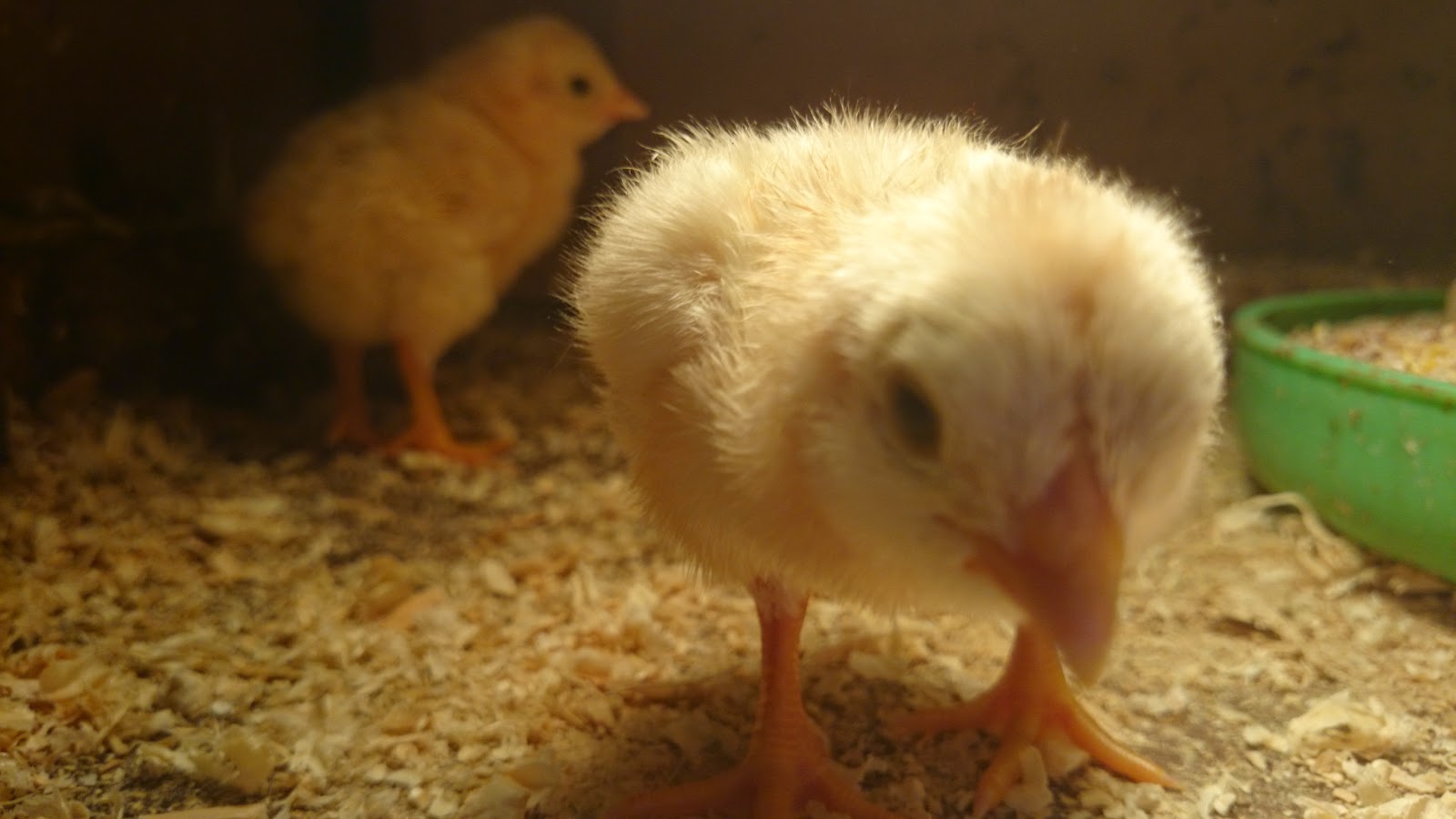 A few goslings and potentially a few more on the way- as our other pair of geese are sitting and guarding a nest. 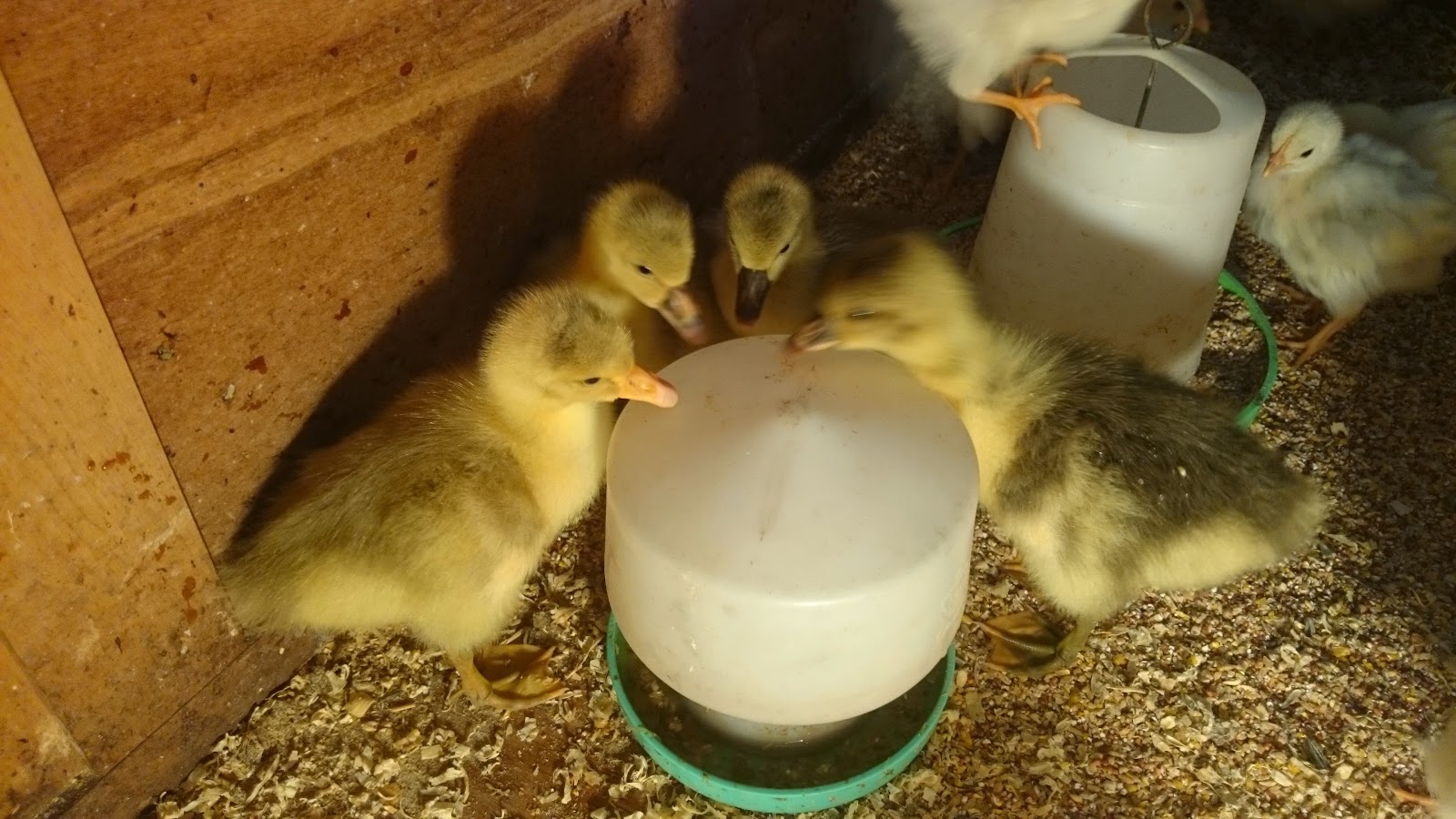 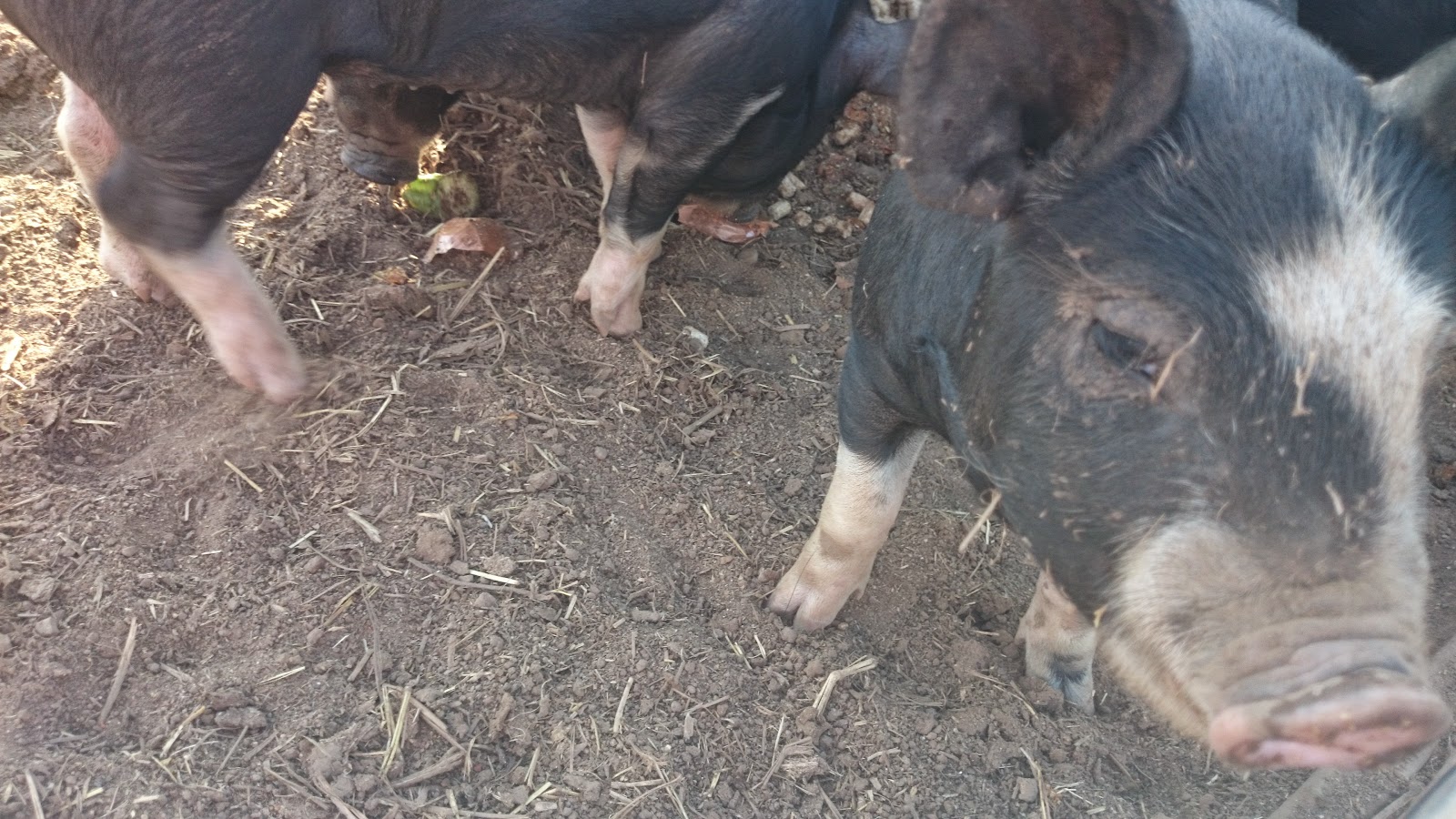 And a litter of piglets (Berkshires)