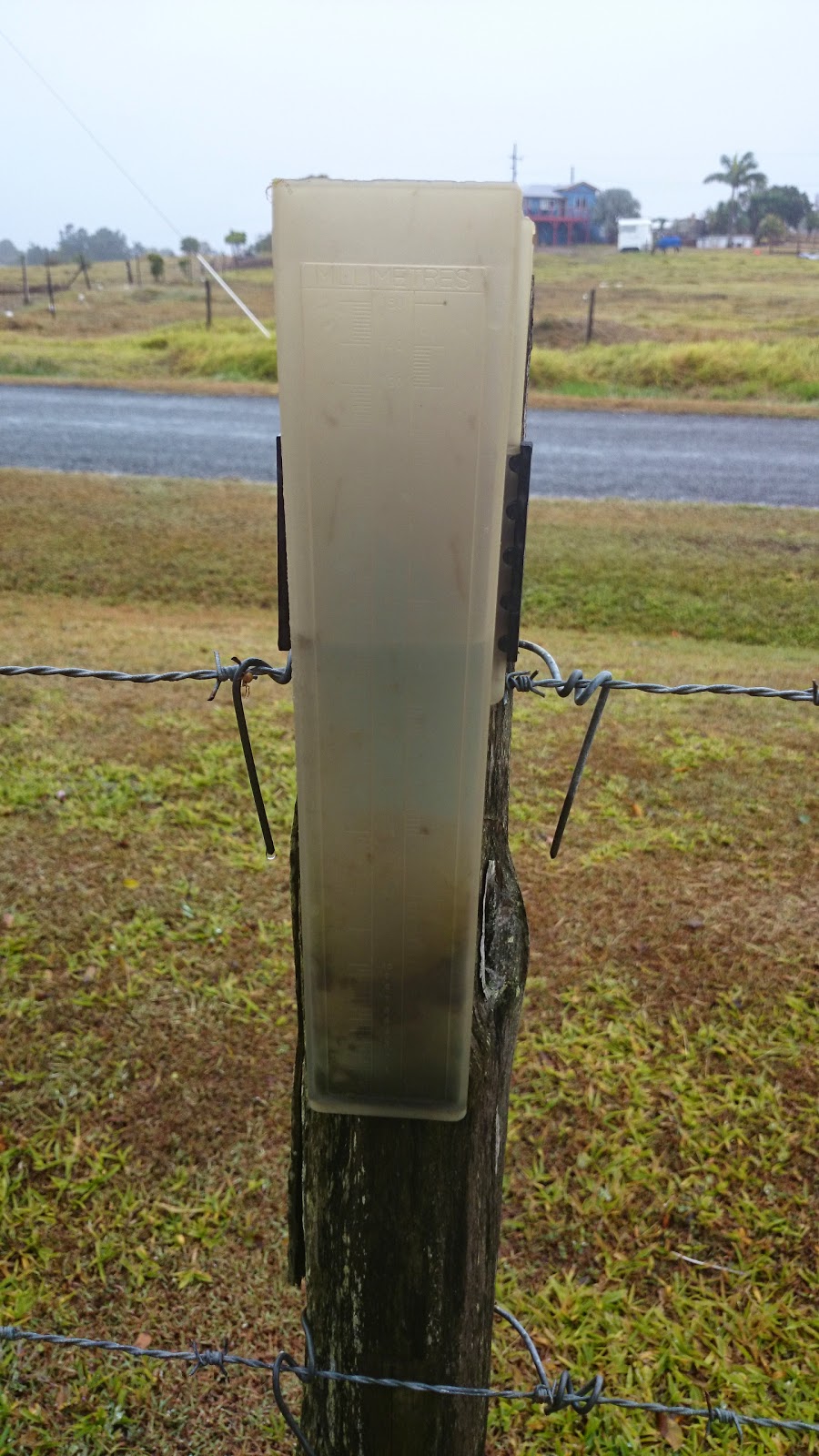 Usually the saying would be 'great weather for ducks', given the (unseasonal, but welcome) rain we received over the weekend. But as you may or may not know we no longer have any resident ducks. Since the death of our remaining drake a few months ago our last duck was looking increasingly depressed. Possibly due to with being the only bird of her species in the flock (though she always had the ability to fly off if she wished). Or possibly the unwelcome attention from our unattached gander. So ‘Miss Duckles’ has been adopted out to join a flock of her own kind. And appears to be settling in well. 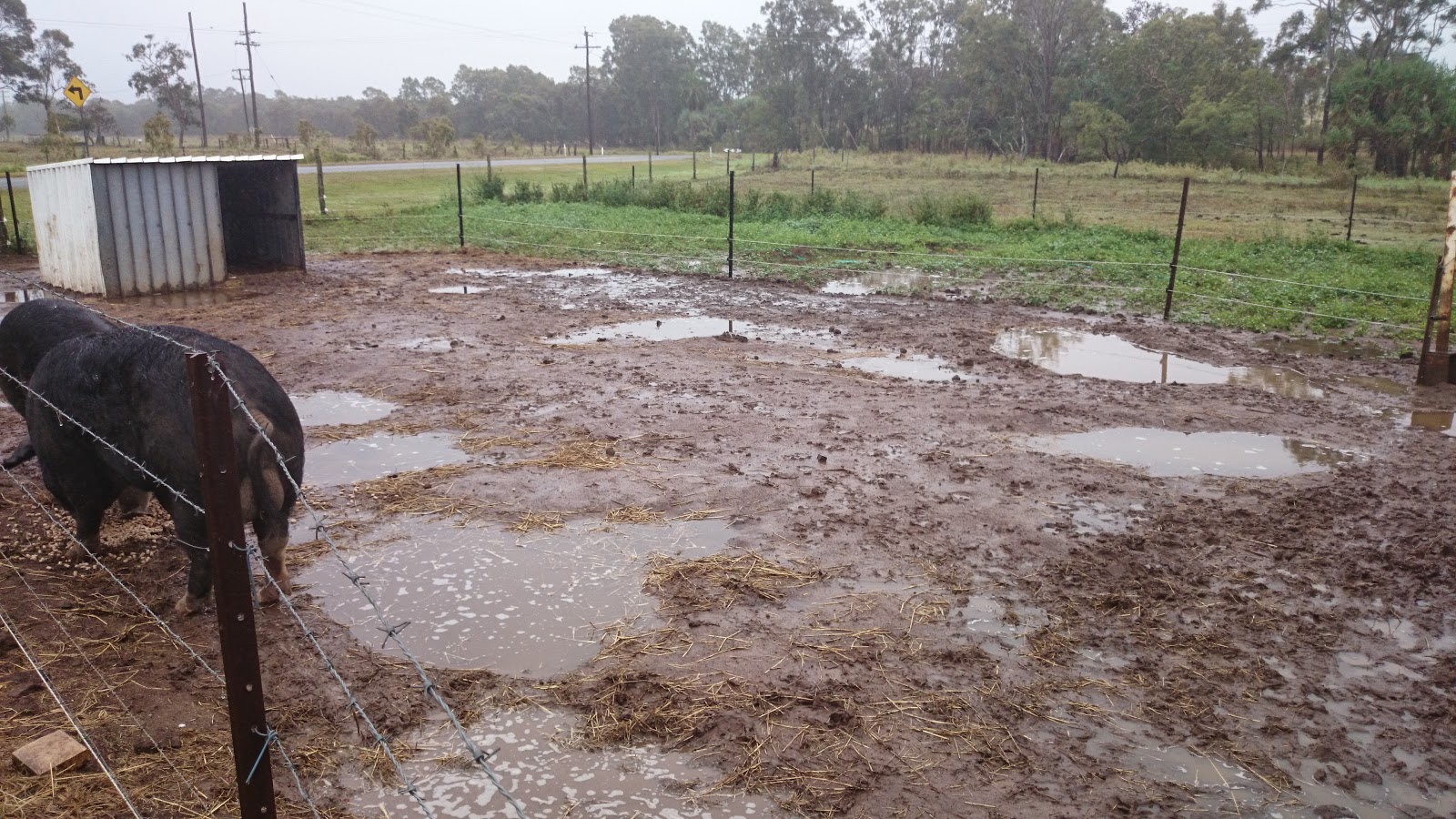 The other reason I say geese, is other than the wet conditions, this weekend (and end of the week) was a predominately goose based affair.

Firstly our breeding pair; having been sat on and guarding their nest devotedly; and occasionally fiercely for the last few weeks (5 to be exact- goose egg incubation takes 35 days). So much so, that we had to set up a temporary pen within the chicken run (where she had set up her nest). To separate the defending gander from the other birds- as he would attack the hens, causing some nasty scuffles and a few minor injuries to the girls and their rooster- who would run to their aid. 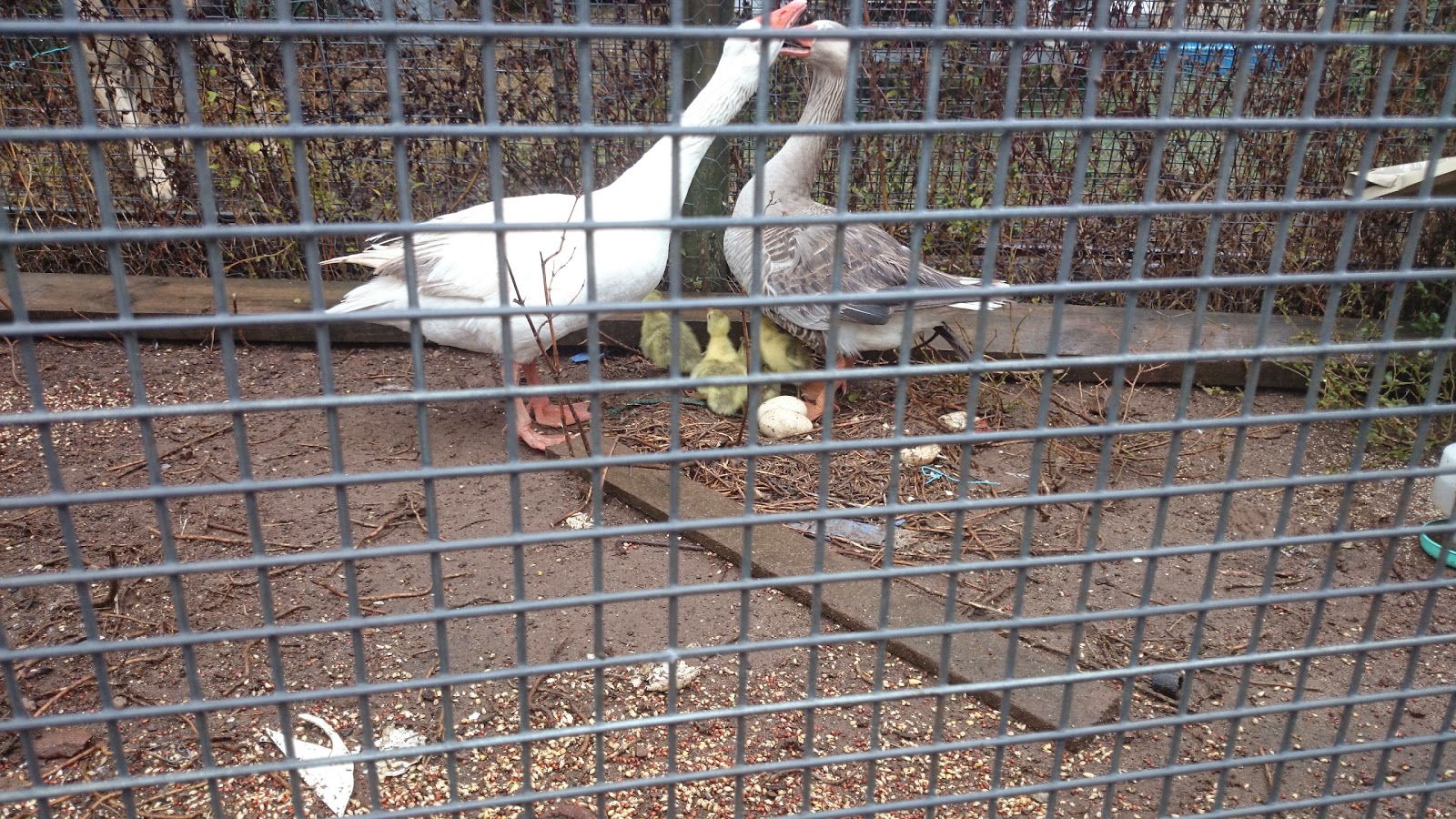 Funnily enough, as soon as we did this the hens themselves started to lay again- we hadn't actually thought them being off the lay as unusual, given it is winter and the cooler weather often has that effect. But clearly the gander had something to do with this too. (We did open the pen when the others were let out of the run).

Anyway back to the geese; our breeding pair successfully hatched 4 cute and fluffy (and healthy) goslings from their clutch of 6 eggs.

Only this posed another problem/decision. When she originally began to nest we discussed whether we would allow her to sit or not. And in deciding she could, whether we or they would raise the young.
We often let the females keep their own reared young, as it seems so cruel to take them away (in the past we have left chicks, ducks, poults and goslings with their mums) but never with a happy ending. As the young become more active and adventurous they have either vanished (suspected food for something, even potentially our own dogs) or they have drown in the various water sources; especially pools (which are essential for the older birds- as they will survive with just access to water. But geese will actually only mate on water). 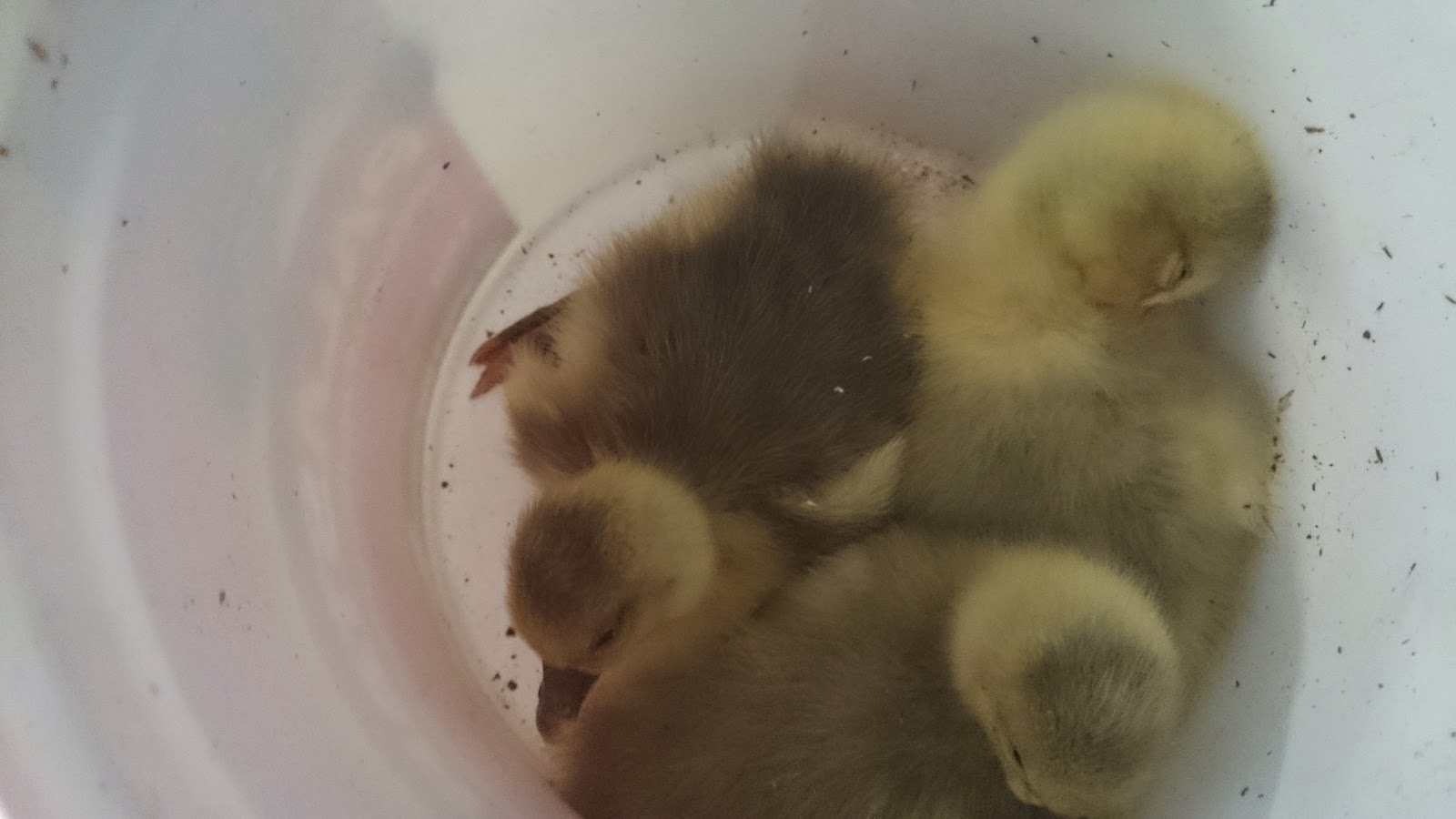 And given mother goose was looking especially thin and lack lustre we decided it was probably kinder all round to remove the goslings.

This was a task in itself- not surprisingly she was exceptionally protective of her young- as was Dad. But this in itself would have posed problems for the remaining flock had we not removed them, as we couldn't keep them penned up. But allowing them free reign with the youngsters would put the other animals at risk, given the adults strength and size.
It also didn't help, that their nest (and subsequent pen) was rather exposed, offering no shelter in the deteriorating weather conditions, as it was unseasonably wet. (So maybe not such great weather for geese, after all). 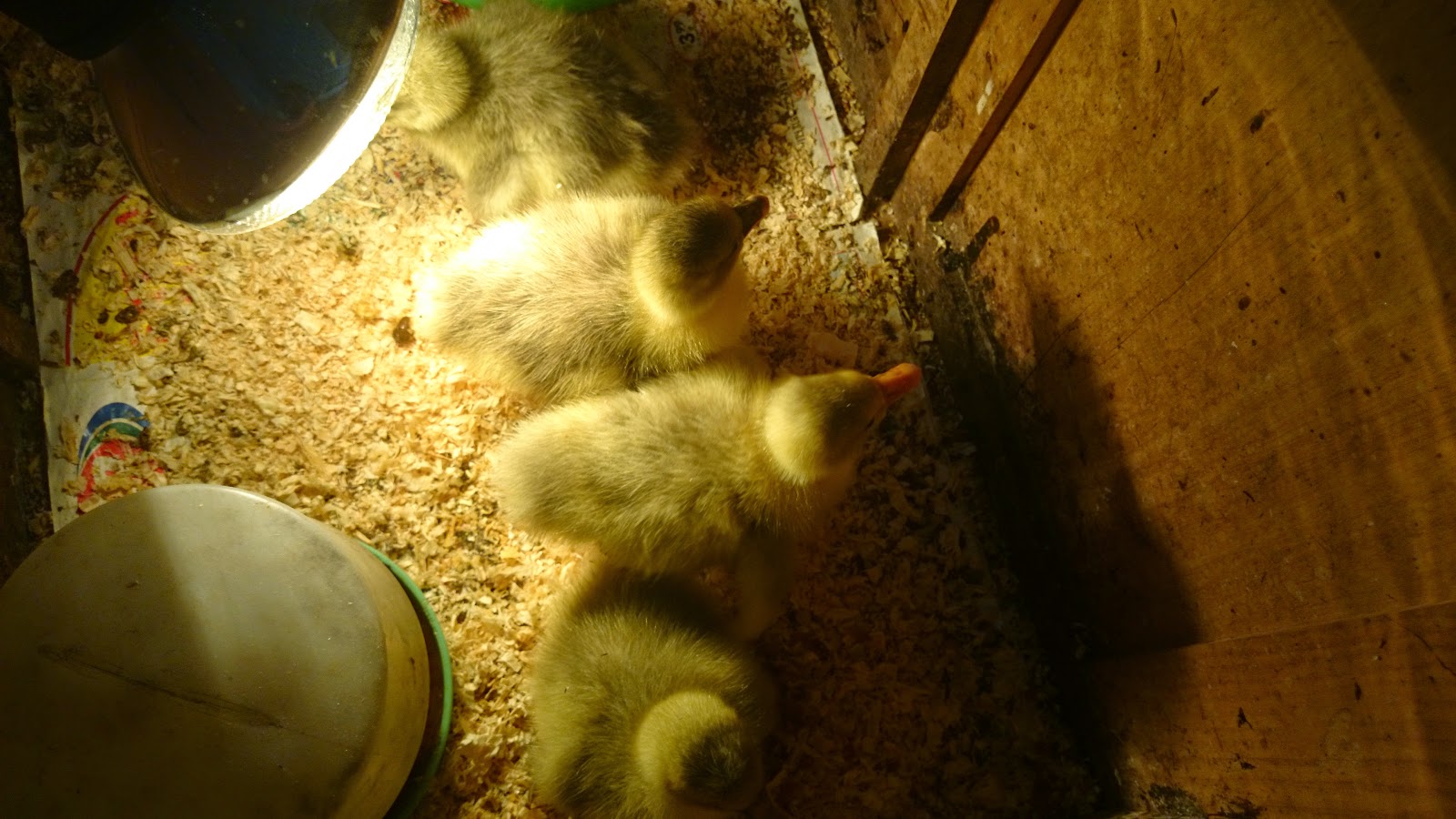 So the goslings are now, following a little distraction and capture- involving the other half fending the parents back, whilst I (being heavily pregnant) scooped the goslings into a bucket, to allow for a quick exit.  And yes I am grateful no-one had a camera; not because I harmed the youngsters, but because I imagine it was not entirely graceful on my part.  But the babies are now warm and dry in the brooder with their new friends, and doing well.

The other part of our weekend was also goose related, though the opposite end of the homestead scale.
As a few weeks (if not a few months back) we acquired another pair of geese- although we only actually intended on adding another female for our single male; this one came with (what we believe to be) a sibling. We have had them separated at the front of the house until we decided what we would do with him. Initially we put him up for re-homing, with no success. So with his increased aggressive behaviour (and a little one on the way), not to mention the amount of poop on our patio and front door step- we decided they (or at least she) had to join the others in the 'rear flock' (away from the front doorstep). Although adding another male did not seem like a good idea. So he had to go. Therefore allowing for the female to have an unrelated mate. 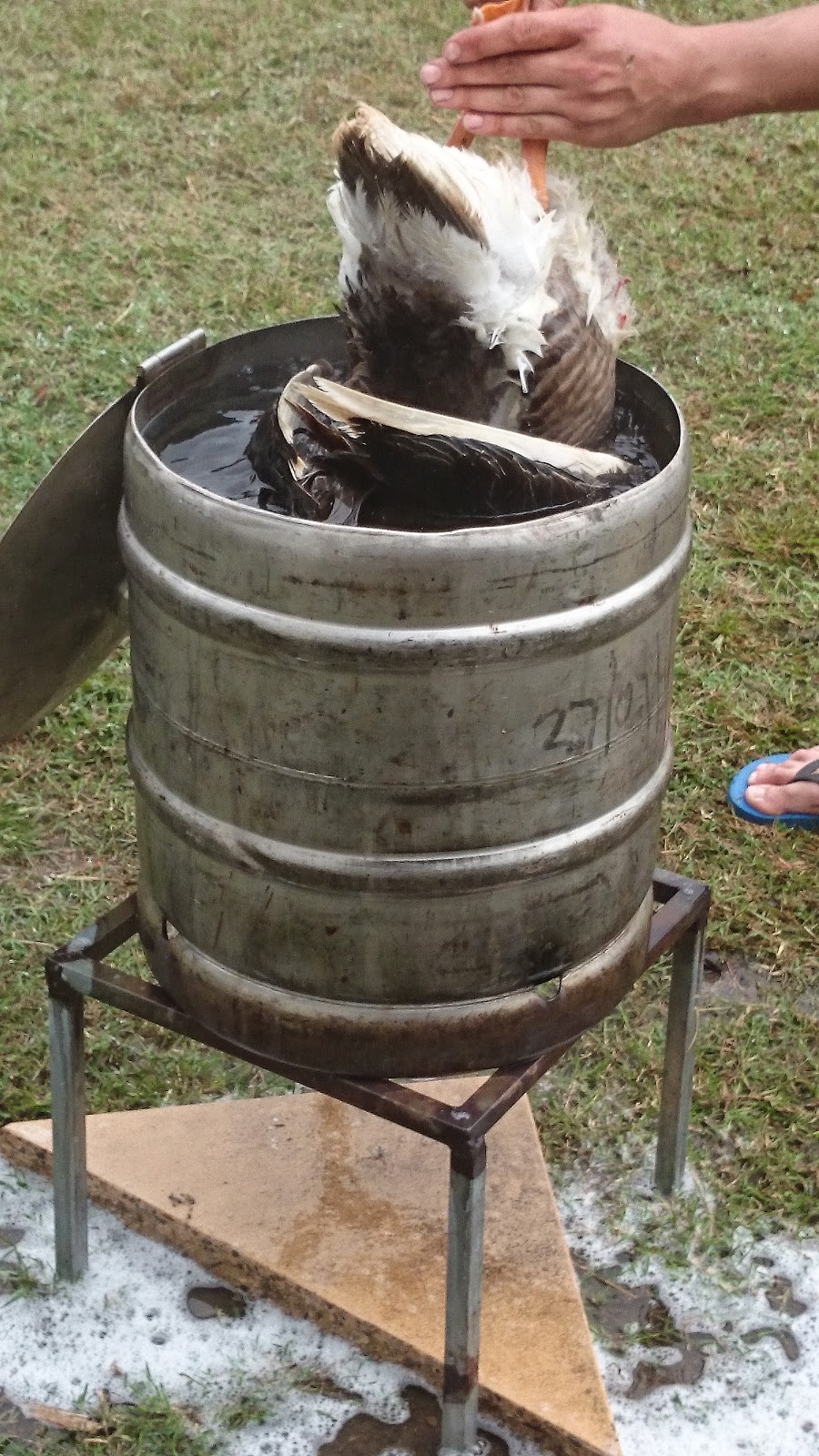 So Saturday we culled and processed our first goose for the table.
*Note the following images include detailed images of processing a bird for consumption. 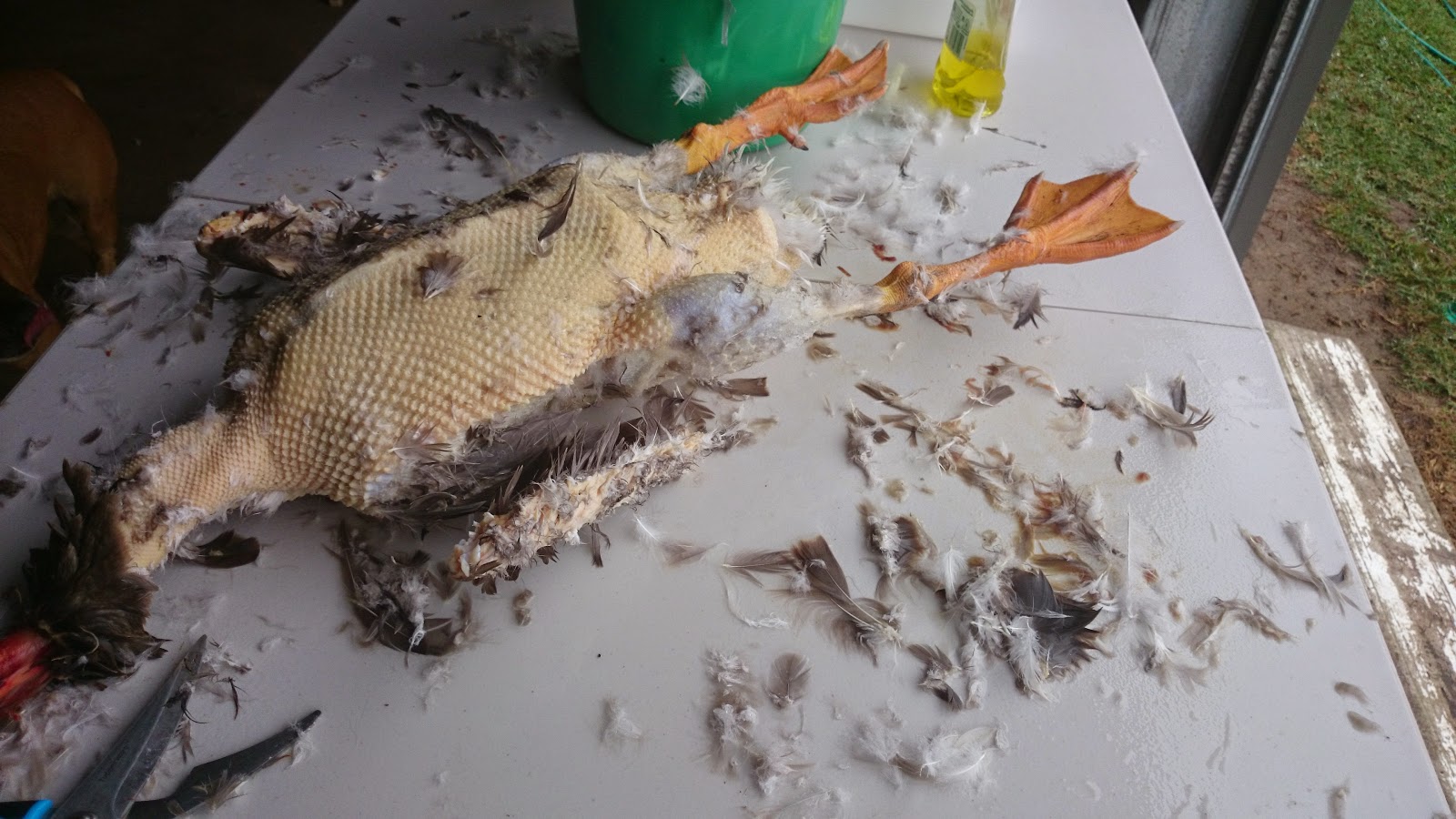 There were a few differences in processing a goose to our other poultry. Initially the plucking is notably more work; Even when scalded using detergent in the water. The initial ‘dunk’ required an aid (broom handle) as the bird would float. Then once we had removed the outer layer of feathers, we scalded the bird for a second time, allowing for the effective removal of the finer plumage underneath. The multi-layers feathers along with the stronger skin (as I would rather not say ‘tougher’) made plucking a more labour some task. However on the plus side the skin didn’t tear not matter how rough you were, so the bird’s final presentation was flawless.

Other than that the process was much the same.

Once you have finished plucking we begun by removing the legs. You may notice that we removed the head prior to plucking and the wings during. We decided to remove the wings, as we were to roast this bird whole and he lack of meat would have burned. So the dogs thoroughly enjoyed them. 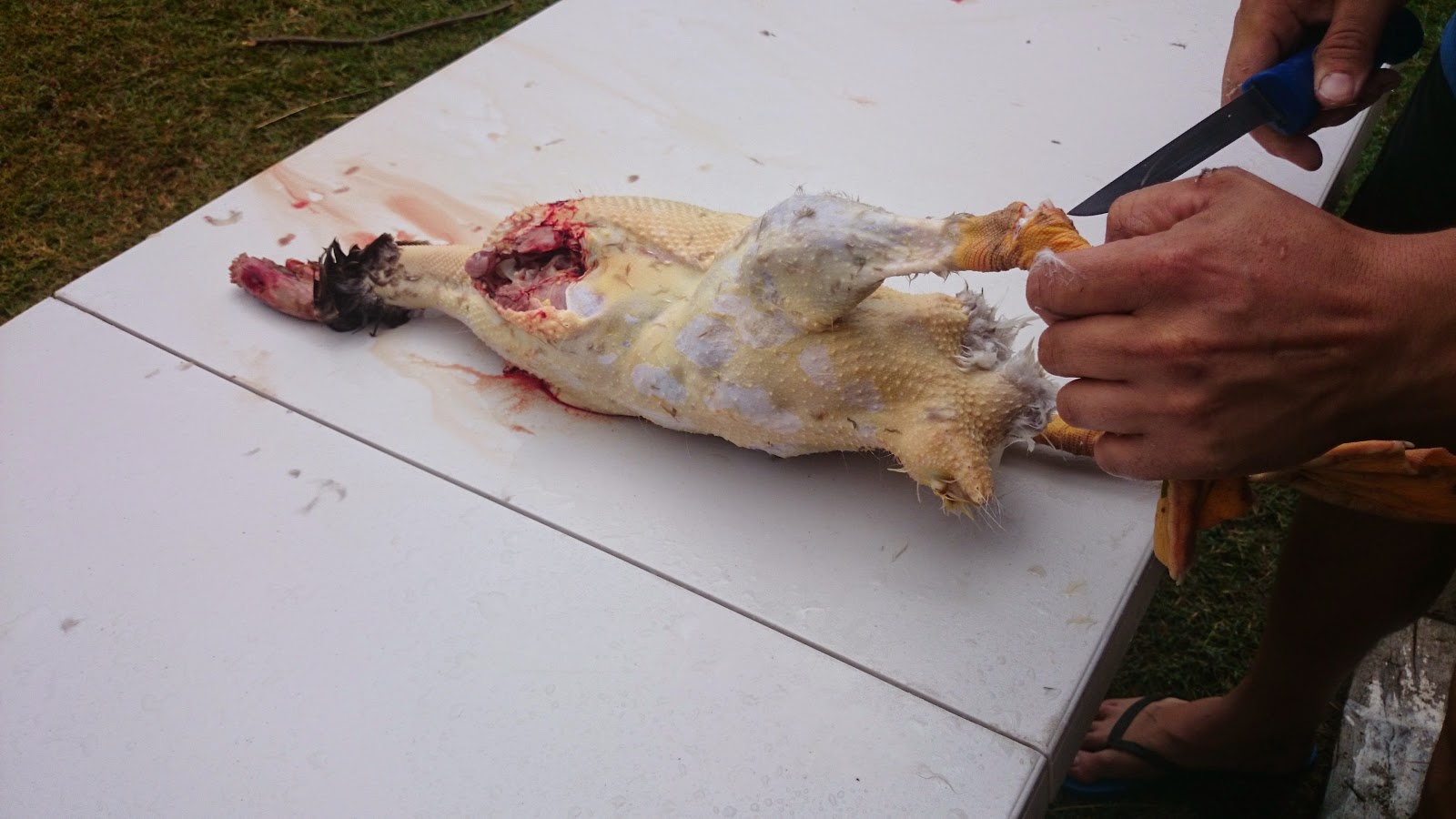 Next we removed the 'parsons nose' working down toward the anus- being careful not to cut this (at this stage). 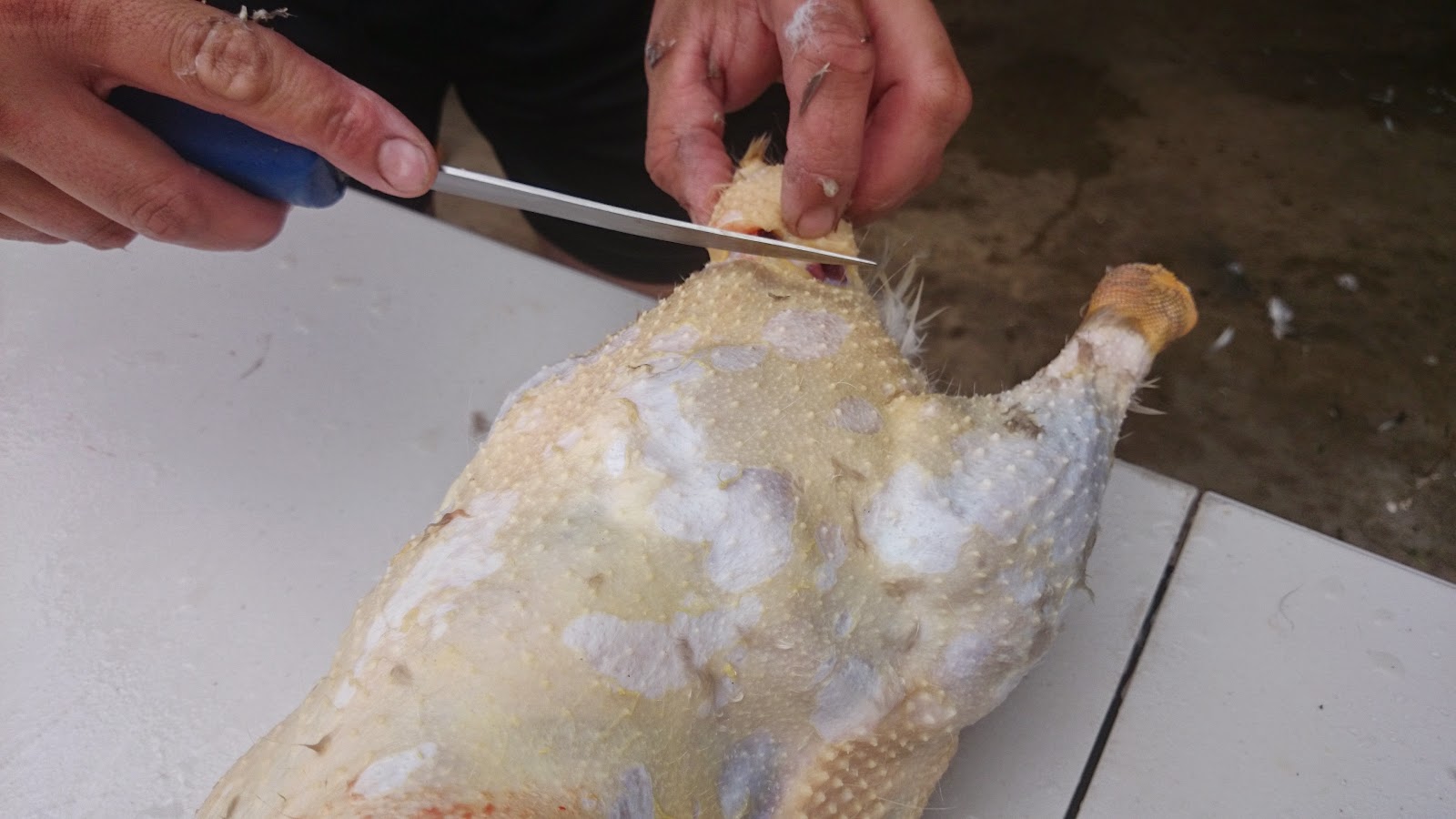 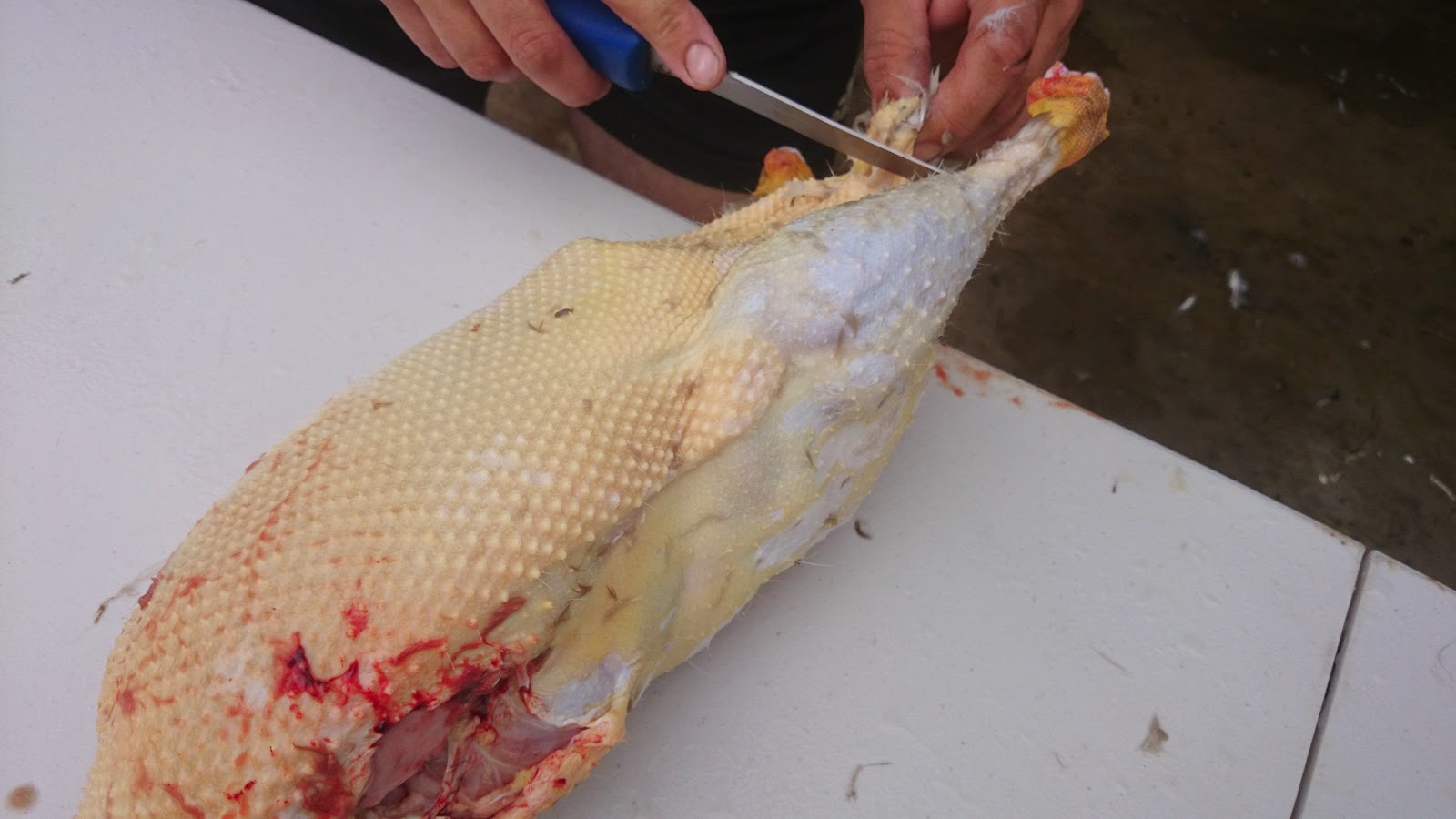 Now pinch the skin just below the ribs/breast bone and lift, nick this with the blade to create an opening. This allows you to place the blade in (facing up) and work away from the guts. As you DO NOT want to nick the intestines etc. and risk contaminating you meat. 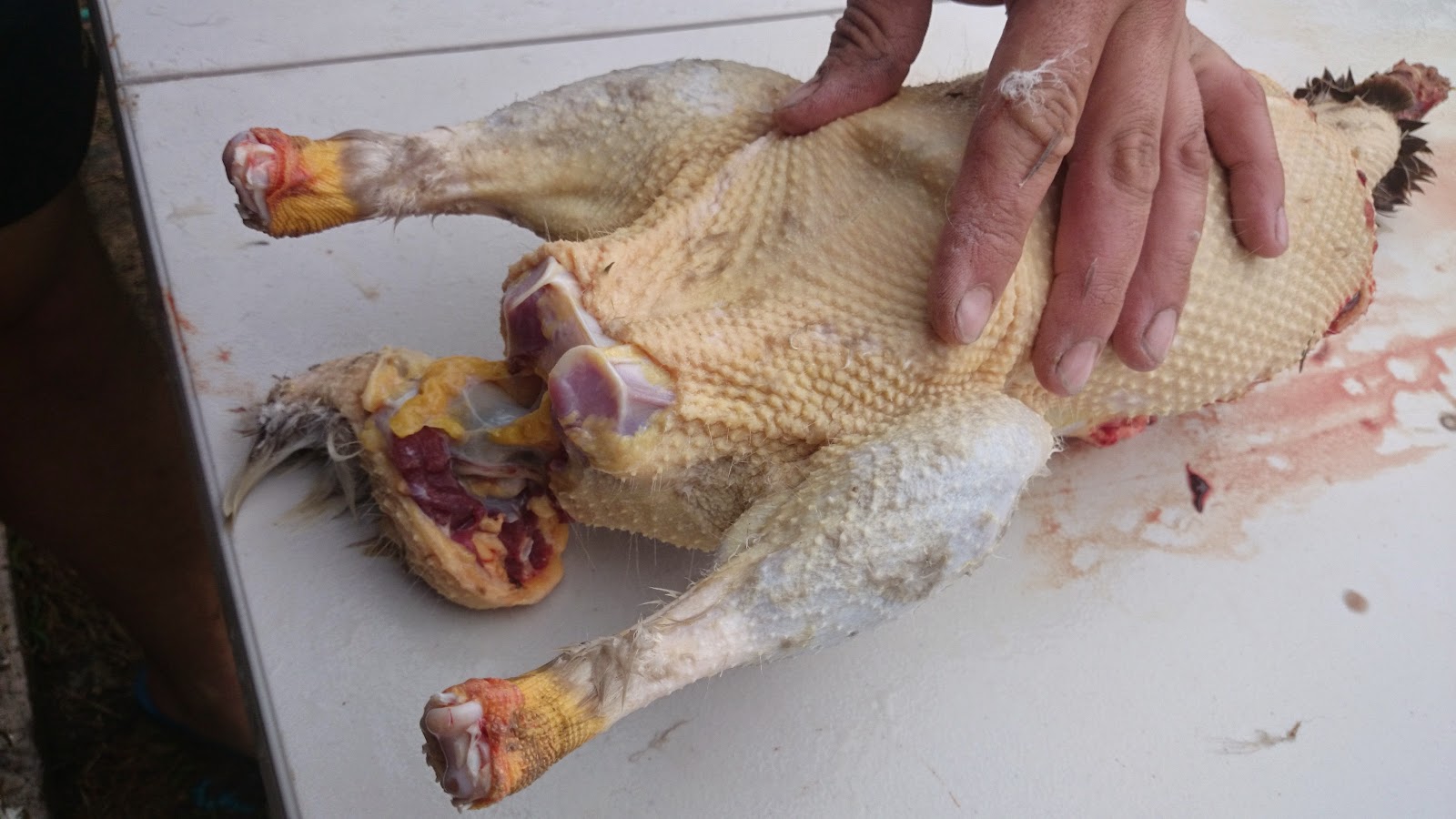 Once you have your opening you remove the guts. 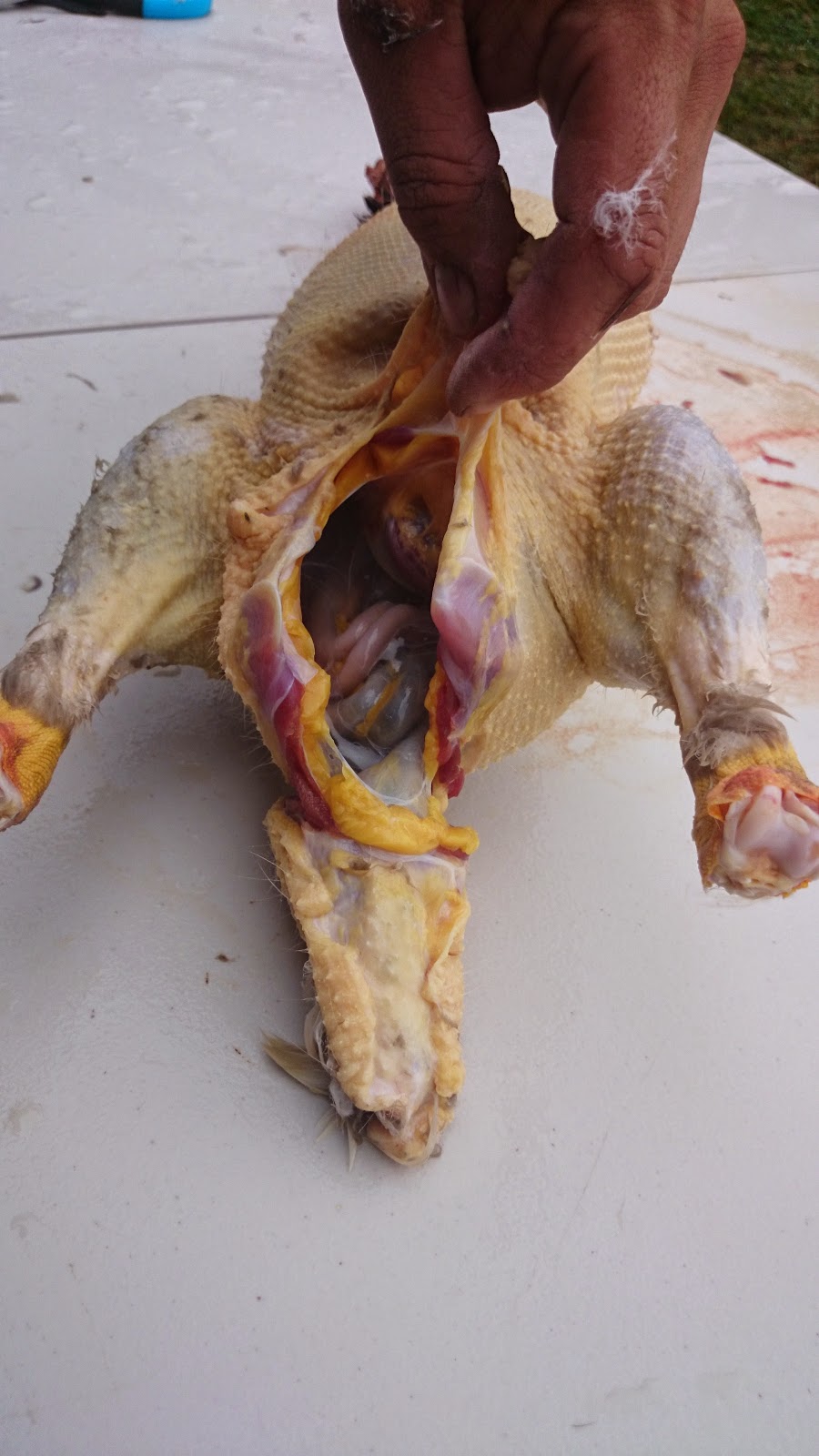 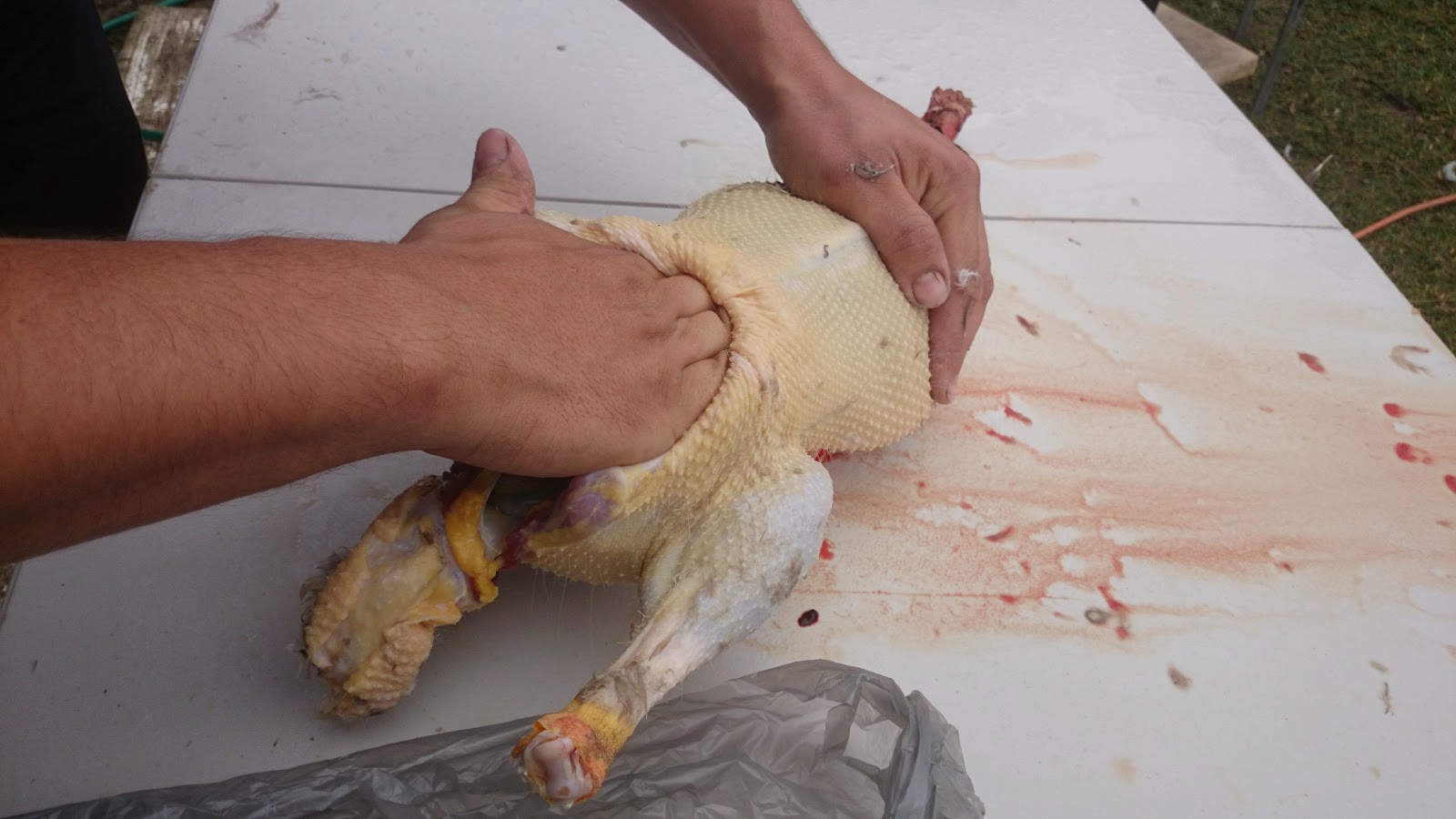 To do this use the breast bone to guide your hand in above the internal organs. Once behind them scoop down and toward the cavity. This should bring most of the internal organs out and allow you to remove the remaining anus (and connected intestines) safely away from the carcass. 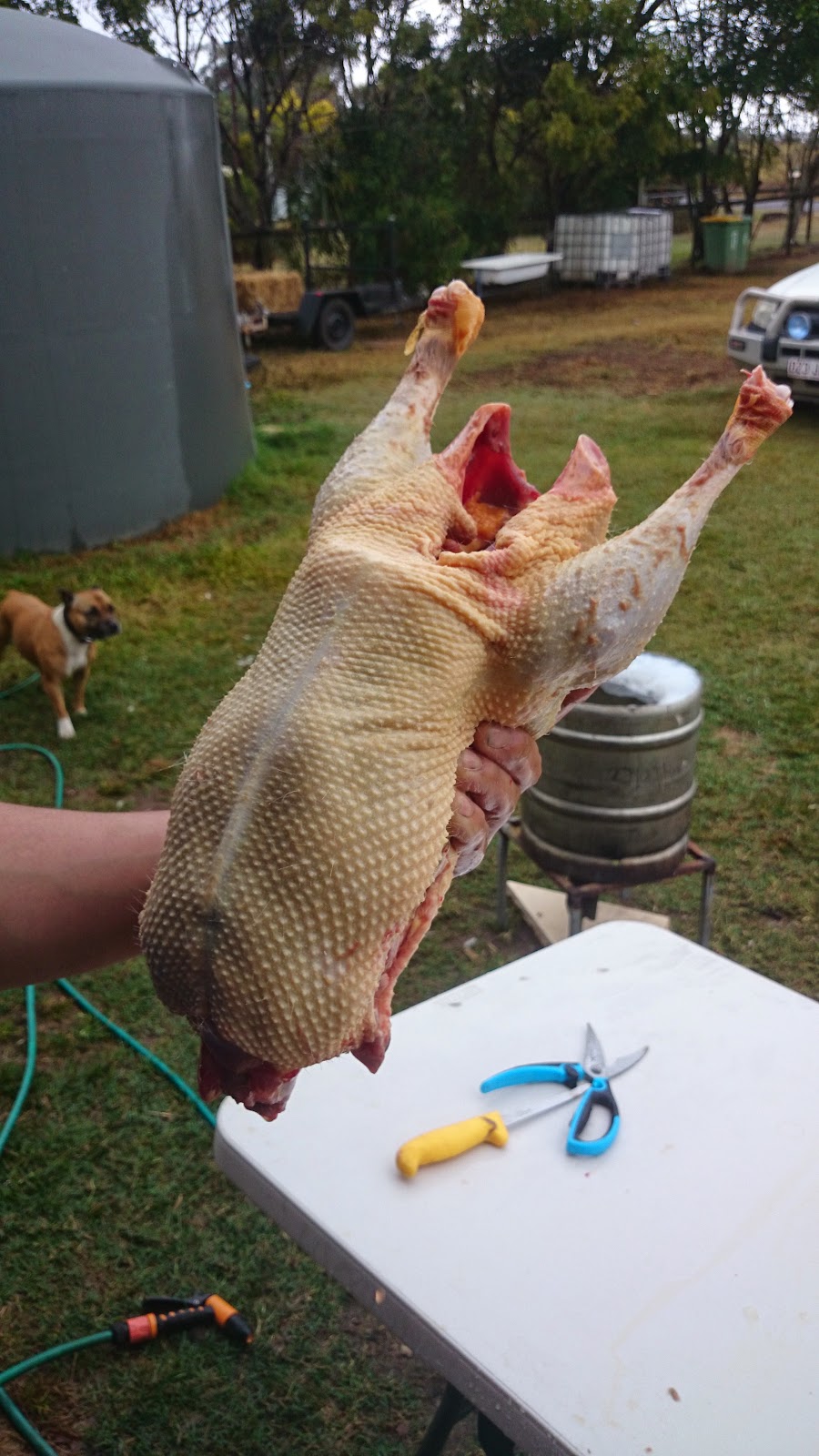 You may still have to clean out a few remaining attached items- such as lungs, wind pipe- remembering this may need to be pulled from the neck. But once you are satisfied that the cavity is clear, rinse thoroughly.
So Sunday evening we rounded off our ‘goosey’ weekend by enjoying our first home killed free range goose.

As for the female, she has been settling in well with her new mate and Mother goose and Dad have been out and about too.