Our first cow in the freezer... step by step


Finally as promised. Now I do feel the need to warn you that this entry contains photos and information upon slaughtering and butchering of an animal. We do not want to offend anyone, but this is a blog about smallholding/ hobby farming and we do document all aspects of our experience.


It has actually been a couple of weeks since the decision was made (well opportunity came up) to finally put one of our cows in the freezer.


If we’re honest this process doesn’t get any easier- no matter how big the beast. But that’s as we care for, and build a relationship with these animals. But we do this as a means of being responsible meat eaters. So when we were offered an opportunity to have an experienced hand, walk us through the process… we would have been crazy to turn it down! 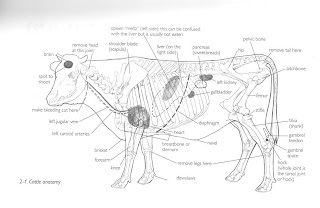 We had been making preparations for one of our girls to fulfil her purpose, and relatively soon. As we wanted to do this as the dry season is coming into full swing (and our paddock begins to look depleted). But we had even purchased and began rearing their replacement. However this date kept being put off…and ‘sometime’ continued to move further and further away. To be honest, even though we have culled and butchered our own poultry and pigs, so far and read the books, but a cow just seemed a little daunting still. Guess it’s a large animal and investment (and a life) if it got too hard and a mobile butcher could be costly. Though still probably cheaper than buying beef, guess most people do not usually buy all their beef cuts at once.


So boys had hatched a plan of action; organising a truck, with a sufficient jib to help hoist, use of a cold room large enough to hang a cow… and all for the good Aussie currency of a good feed, provision of beer and few choice cuts.


When we (well I) was asked if I wanted to keep the hide? I instinctively asked if I could (if it wasn’t too much trouble). Though I had no idea what I was going to do with it! This meant extra care would be required whilst skinning, and some work afterwards. But as we hate wasting anything when killing an animal, I felt it was a further opportunity to do our girl justice.
As you may have realised we try and do all our kills and processing on site. This minimises stress to the animal prior to the act itself. Not only do we not only want to stress our animals, as I would have mentioned, despite our plans for them, we still care. But in a production sense, stress in any animal causes the release of adrenaline which affects the quality and taste of the meat. A happy animal provides quality meat, even at the very end.

Generally in preparation you would pen off the animal. Separately them for dispatch and avoids the others being stressed or encountering materials you would rather them not eat etc. (like meat). Although some may find this separation itself distressing, it is still not as distressing as transport. Where transport is necessary, many will often have practice runs, loading and unloading to desensitise them and reduce the stress, for this reason.


Once penned, you then restrict their food, providing only water for the day or so prior, as this helps when gutting. However in this circumstance she was just separated in the paddock, by the lure of food and taken down with a clean shot and immediately screened (from our other cow) by the truck.


The shot was quick and effective. I have used a diagram from a book we have regularly referenced (Basic Butchering of Livestock & Game, John J. Mettler Jr.) to demonstrate the most effective point. 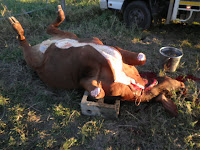 Following the kill the animal needs to be bled by cutting the throat and pumping the front leg (this will speed up this process). This is to be done immediately, as blood within the carcass may encourage bacteria growth, contaminating the meat, making the kill itself pointless.


It is at this point the voice box was removed and the oesophagus was tied off using twine. This avoids any contamination during gutting, especially as our cow had not been deprived of food.


So once down the cow was positioned on her back and a breeze block (pictured) was used to prevent rolling. 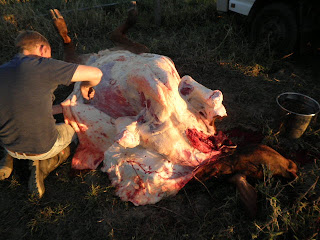 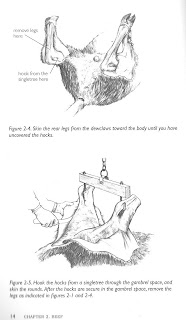 Once bled the front hooves/legs were removed. The removal point is just below the joint, as there is a lot of connective tissue in the joints themselves.


From this point the skin was split up the centre of the beast and udders removed. 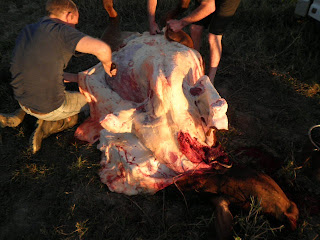 Remove a strip of skin from the inner side of the front legs (approx. 1-2 inches/ 25-50mm) from brisket to elbow joint. Then work from head/front legs to back


Extra care is required near the hips and spine side of the ribs, if intending to keep the hide. 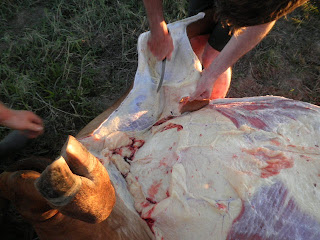 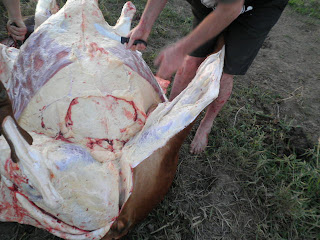 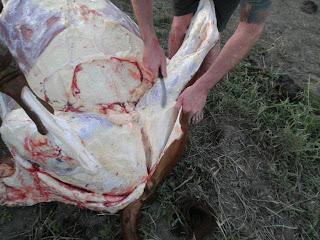 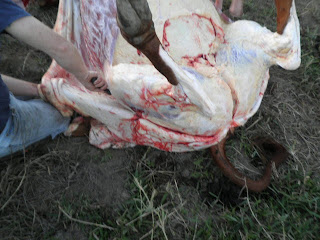 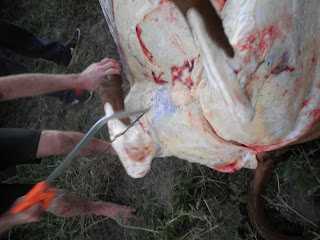 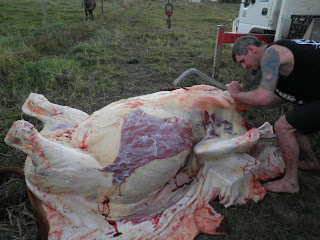 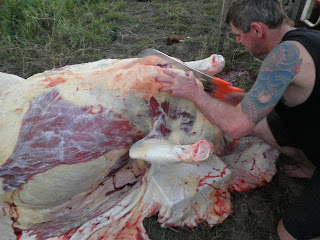 Skinning begins here, as the skin is separated, we began to winch the carcass. This was achieved by inserting a gambrel rail/ spreader bar, at this point you realise how important the connective tissue below the knee/elbow joints are. This lift can be done progressively, as required to assist with the removal of the hide. 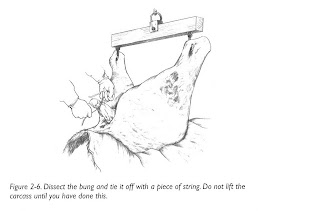 Remove the tail and cut around the anus, pull out and tie off with twine (creating a bung). 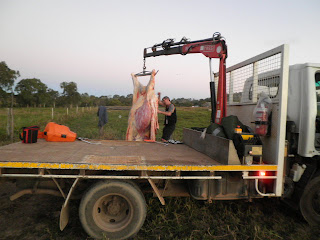 Once the carcass is upright and skin removed the next stage is to gut. 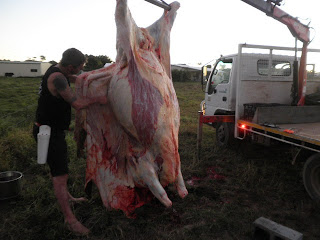 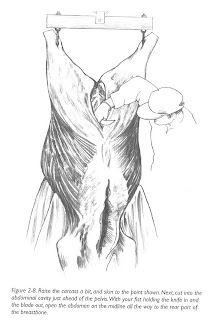 Using the technique pictured is essential when gutting, ensuring the blade is pointing outwards avoid nicking anything you shouldn’t.


So starting from the area where the udders were removed make a small incision and work the knife (handle to beast, blade outward), down the middle to the brisket. You will need to support the organs, to ensure there is no contact with the blade. Once there gravity will complete the next stage, especially if the animal was not fasted like ours. Pull gut to floor, remove any remaining organs. Separate any you wish to save, and bag rest that is to be disposed of. 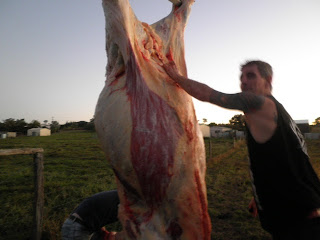 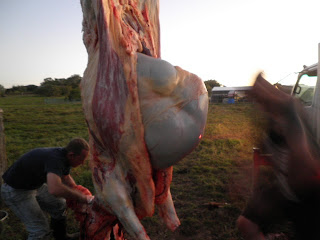 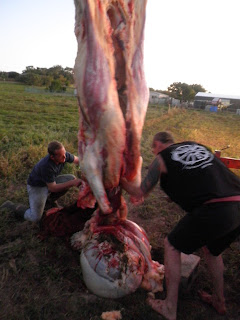 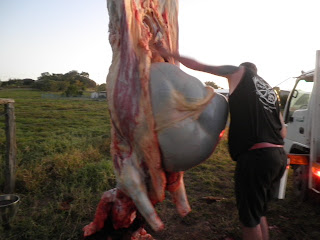 It was at this point we removed the head, although am sure this could have been dealt with earlier. 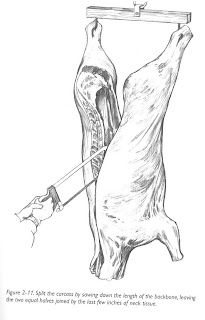 The carcass was split into half and quarters for hanging. The diagram uses a hand saw, we used a NEW chainsaw. This chain saw was oiled with vegetable oil and this is to be its sole purpose. 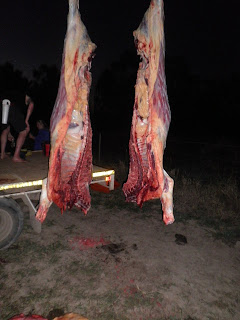 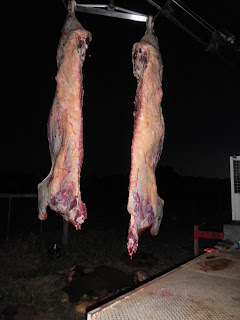 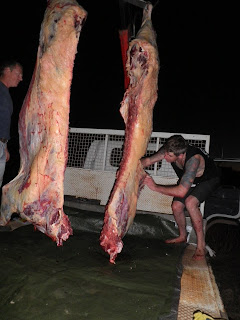 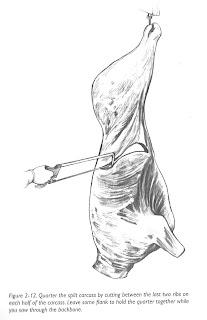 Once split down the middle the halves were split again, creating ‘quarters’. To do this we used a knife to separate from the ‘11th rib’ (counting from the front) and used a handsaw to cut the spine. 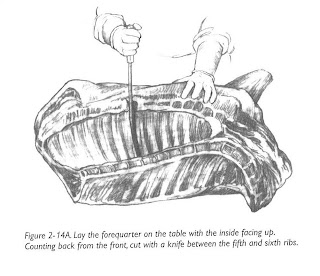 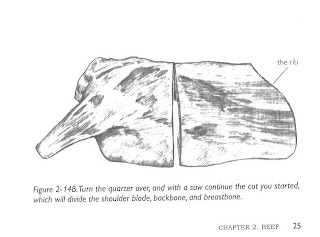 These were then transferred to a coldroom for hanging. It is vital that the quarters do not touch, as again this can harvest bacterial growth and spoil the meat. Hanging takes place for a week onwards. Ready yo be divided into cuts, sausages and mince. 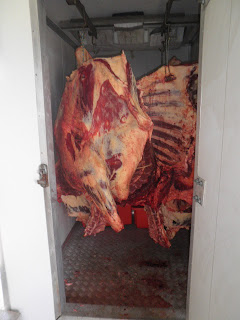 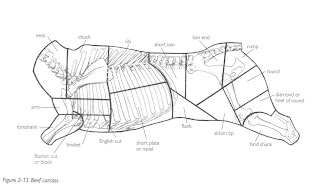 As for the hide, this is currently drying in our shed (surrounde by rodent traps, for good measure). This involved smothiering the inside with salt, about 75kg in total- probably a little over the top, but didn't want to under do it. As for what we intned to do with it, I guess we'll see. And finding a tannery is proving difficult, so we maybe attempting this one ourselves too.