What a busy weekend!


We spent most of Saturday running around, as we managed to acquire some materials that we intend to use in coming weeks for a small cattle shelter. So whilst we had to hire a car trailer to accommodate the lengths, as they would have over hung on ours be a few meters. But that was the only cost as it was free- recycled from an old roof. The main body of the lengths were in fair condition, so we have some work ahead. And we picked up a frame from a friend, that had begun life as his poultry run (mark 1) and that only cost us a few young turkey poults! 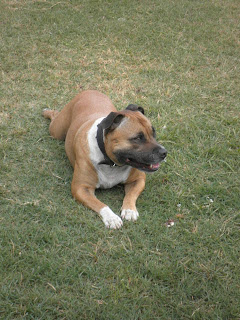 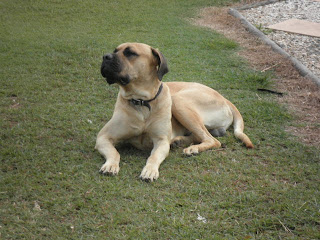 Sunday was chicken day. Our Ffion loves chicken day… she’s probably the most enthusiastic! Other than Madog. But as much as we do not relish the process, it is necessary for what we do. So I will not apologise for detailing the processing of our birds, as we blog everything. But for those who are sensitive this post is not for you.


Our roosters have had a reprieve for the past few weeks, as other projects or commitments had not allowed us to get on with the job. However as the Silver Sussex and Plymouth rocks are fully feathered and far too big for the brooder box. And our chick and poult count continues to increase, with the turkeys hatching the odd one here and there, they are also running out of room. So there was nothing for it we needed the run, so that had to go.


We decided to also cull our smaller (picked on and therefore not working) Indian Game rooster. We have always hatched and raised our birds in the knowledge that those roosters who were surplus to requirements, would eventually reach the pot. So in total we killed and processed 6 roosters, the others a cross between our Old English Game cross hen and our previous Indian Game rooster. So not only were these a new cross we were trailing but we actually trying something new this time- plucking (courtesy of some knowledge gained from watching River Cottage Australia).


Now many would assume that plucking is necessary when killing and processing poultry. However as we have found it to be very time consuming in the past we have stuck to skinning (this I have blogged about in the past).  Now it was whilst watching River Cottage Australia a few weeks back that we saw them scald the birds first. We had attempted this in the past, though we think we had the temperature wrong. We had scalded at 64 degrees (same as a pig), but they did theirs at 74… so here is how it went. 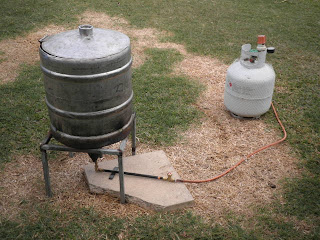 So before we begin we set up everything we may (or may not) need.  Our table is washed down and we set up with a bin in close proximity. We each have a sharp knife and poultry scissors, and keep the knife sharpener close to hand. For the scalding we filled our keg with water and set up a gas bottle and fame to heat- bringing to temperature, checking with a thermometer. 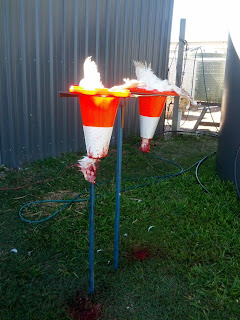 We set up a tub filled with water and ice to bring the birds temperature back down before gutting. And finally we set up the stand and ‘killing cones’. These I would have mentioned in previous blogs, but the cones contain the birds whilst the nerves react, reducing stress and mess.


The kill itself is quick, cutting the jugular and allowing the bird to bleed out, before removing the head.  On this occasion I collected the blood for the garden. As I have stated before when we take a life we try and utilise as much as possible. If we hadn’t I am sure the dogs would have made the most of it… though they can get a little messy. And they were too preoccupied with the heads.


If you do want to do this you will have to dilute it with water, not only for the plant but also to stop it drying out in the bucket. 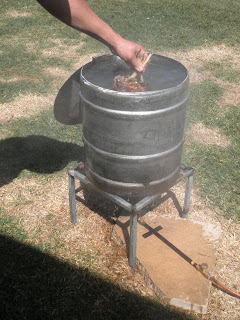 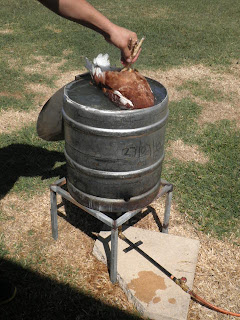 Next was the scald. 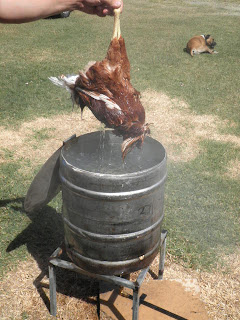 Once the water was hot enough we dipped the bird in whilst holding the feet. The bird will try and float, so move it around but be careful not to scald yourself. We held ours under for a count of 45 (15 to ensure it was fully submerged and then count of 30) then remove and transfer to your work area to pluck. You don’t want to leave the bird submerged too long as it could begin to cook. Also be aware once you remove it will drip, which is also hot and the feathers will be a little hot to touch, but shouldn’t burn you. 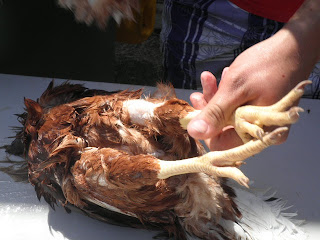 We were amazed by how affective this method was! And how few feathers we had floating around… this is something that had always bothered us whether we skinned or plucked in the past. Our garden would be covered in feathers. But with this method the wet means they stick to you or the bin!


Following the plucking we submerged each bird in the icy water. Allowing us to begin the process again. We always prefer to gut all our birds at the same time, so have them all prepared for this stage together. This just helps prevent contamination, we wash down our table and tools between each bird and each stage. 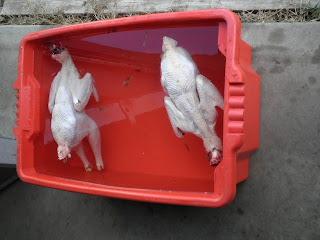 So once all our birds were cooling off, having washed down our table again we began (with what we thought were) the first few. To gut we make a small incision below the chest. Just enough to price open with your fingers, before running along the sides with the tip of the blade to create an opening to the cavity. This is to prevent nicking any of the intestines etc. Once you have the opening, you place your hand along the top, and as far back as you can. Then scoop back towards yourself. You are not likely to pull it all out in one go, but gentle and patience are key. Once you released the majority back through the cavity you created leave the intestines etc. attached. As now is the time to follow around the anus and it will all come out together, avoiding any breakages and contaminations. We then remove the heart, kidneys and liver, from the removed organs before disposal. 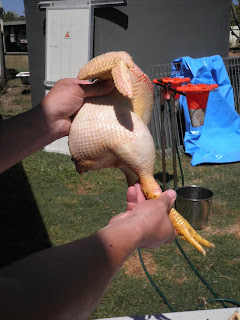 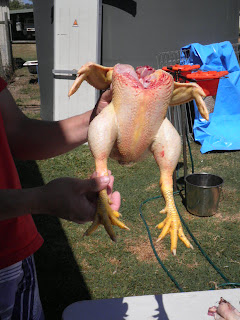 Back to the bird, you may still need to remove a few other organs, the lungs are generally the most tricky. I run my fingers along the inside of the ribs and find they generally come away. Another is the wind pipe, this I push back through from the neck into the bird, then remove (that’s just my way).
Once all this is taken care of we remove the neck and feet; mostly for presentation, they do make good stock… or in our house dog treats. We used to get requests from a friend who made yum cha for our birds feet. This isn’t a speciality I’m crazy over, but they do get used.
To remove the legs (from the 'hock)- run the knife alond the knuckle (above the scaled leg) then flex forward and back with some force. This will release the knuckle, so you just need to cut the tendons. 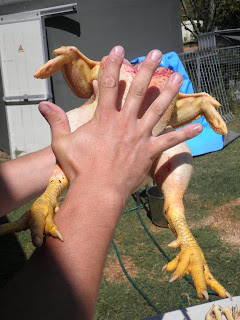 And finally the parsons nose (I will have to look up the reason its called that one day). To do this turn your bird breast down. Place the knife at the base of the parsons nose (closest to the body) and slice back towards yourself, it should just come away.  Now rinse the bird, as any blood etc. could encourage the growth of bacteria and therefore spoil all your work (and the bird).Then place in a cool place- ours a ‘butcher container’ in the freezer, till all are done. This allows the flesh to cool completely, much like hanging of larger animals in a cold room. 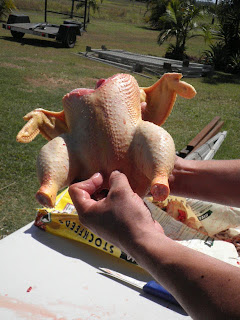 Once cooled (a couple of hours) we weigh, cling film (wrap) and label each bird; breed, weight and date (for future reference). In hind sight our Old English Game/ Indian Game crosses were not exceptionally successful, as a meat bird anyway; as they were all 1.2- 1.6kg (dressed out), whereas the Indian Game rooster dressed out at 2.54kg. Not that size is everything, but if you’re going to breed, raise and kill to eat, then you get more output per bird and therefore require fewer for the same amount of meat. So not a cross we will continue with. This is something we consider when we are asked ‘is it worth it?’ Not that we want to raise broilers instead but our Indians and Sussex have been far more productive. Not that we regret it, as these birds were the result of our incubating eggs (and roosters are a bi-product) that we have to make a decision about. 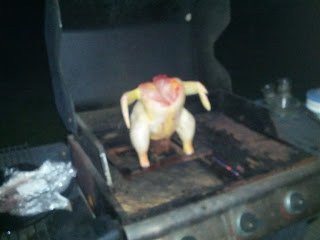 Indian Games are easier to raise, as roosters can happily co-exist and prefer to free range, so cost less to raise. Where the Old English crosses were aggressive to all other roosters, but not each other, so required segregation (eventually the cause of their demise).


Otherwise we cooked our Indian game on the bbq Sunday night- the ‘beer can’ method and it was delicious. The beer can method involves placing a can half filled with beer (in a stand) into the cavity, so it ‘stands’ up right and cooks inside and out.