First I want to apologise for being AWOL for a few weeks, due to circumstances beyond my control.  Unfortunately I was involved in a bit of car accident, fortunately I walked away, just been a little sore and sorry… my car however didn’t fare so well.


So all in all it has been a busy few weeks, but not that I have been of any help! 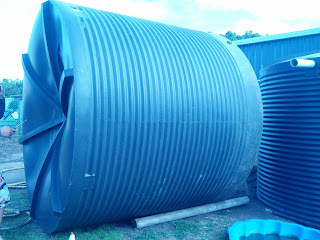 Here in Queensland it is winter, and winter means ‘dry season’. So now more than ever we are reliant upon our water stores. 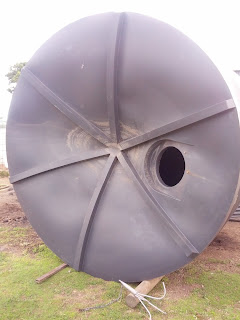 As avid fans of River cottage, we have been following River Cottage Australia since it began a few weeks ago- not quite the same as watching Hugh struggle from scratch, but the idea is the same and we’re keen to see a version take off here- covering topical issues in the Australian climate. And funnily enough, one of last week’s topics was (in part) about the necessity for a reliable water supply. This is something particularly relevant to us, particularly at the moment. As I am sure it is a relevant topic for many all over the world. If you grow (anything), have livestock, or are not on a town supply… Or, all of the above like we are, then a reliable source is vital to our, and our farms survival. In our case it hasn’t been so much the sourcing, but more of its sufficient and effective storage. 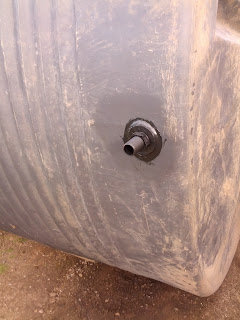 Our water is sourced from either rainwater;  by feeding from both the house and the shed, which is mostly gathered during wet season, and will see us though for a few months. But in addition to this we have a ‘bore’; a pump directly into an underground source, much like a well/spring. This we use to ‘top up’ or supplement our tanks during the dry season.


Now unlike the River Cottage episode we had the source, it has been the storage that has been letting us down. We were losing water making our store as unreliable as their source... Neither is a desirable prospect. 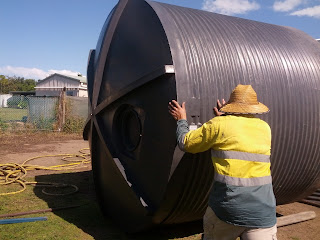 So we allowed the one to drain, and (without any help from me) he’s had to lift the tank- as they are semi-submerged (to allow for pressure to the pump). And remove and replace the taps and seals.


He also managed to force out the dent in the top (that was caused by the excavator driver, from last year when we moved them), something that had been niggling at him.
To be honest I wish I had filmed it, pure for his determination and ingenuity! 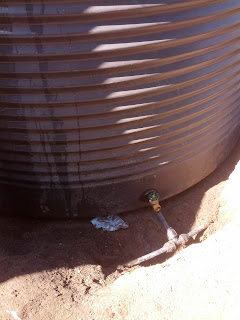 So the tank (now restored to its former glory), with new shiny fittings and fresh seal and back in place- this was prety impressive on its own. Since last time we placed the tanks, then fitted the pumping. this time we had to get the 2500 galon tank to fall back in line with the pumping!
So now in, and half filled (and fingers crossed). So far dry. So now to use the other tank and start again.
Posted by maesydelyn.qld@gmail.com at 9:22:00 am