OK so I have been a little absent recently. Seems to be a common apology, but I do mean it. I have loved writing this, so would hate for anyone (if I am vain enough to presume anyone is reading this) to lose interest. As I have loved sharing our experiences... no matter how minor, inexperienced or some times graphic, but this is the reality.
I shouldn't make excuses, however I have been away for work for a few days. So Matt was left looking after everything solo.  So I guess you would think I would have little to report, but you would be wrong.
We are yet again a few more birds down. Since we stated around Christmas we wanted to down size our flock, the numbers have been tumbling! Something we need to rectify. 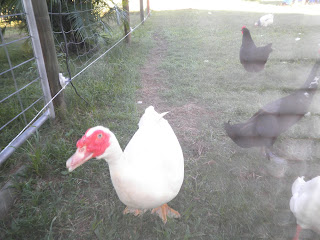 Unfortunately we had to have our resident drake, Patta-duck put down on 7th; after he had been 'not himself' for a few days. It sounds strange to complain a duck was waddling, but he was not standing up right, but shuffling. He was eating and drinking, as I was making sure he did (and his appetite was still good) so we made a last ditch attempt to save our pet drake. Unfortunately he was not well at all. He had definitely lost weight, as well as being lethargic and not walking properly. The vet also said he was dehydrated and had limited strength in his lower limbs and even his tail. She believed it was a bacterial toxic poisoning; probably something he had ate, as ducks are natural foragers, and with the wet weather we have had he could easily had found something that had begun to rot. So Pat, being a very sick duck didn't come back home. I stayed with him, as I didn't want him to be alone. Might sound strange from someone who raises birds as livestock, however Pat was very much a pet, and could win anyone over with his personality.
Whilst I was away, our remaining hybrid hen; who had earned herself a reprieve, by laying whenever the freezer threat was spoken. Became dog food whilst I was away... and Ffion was very pleased with herself. An expression I witnessed again yesterday, after I went out for an early morning run. Only this time it was one of our your pullets, who we have been waiting to start laying. So for future reference they will be staying in bed, if I head out early and not helping herself to breakfast. 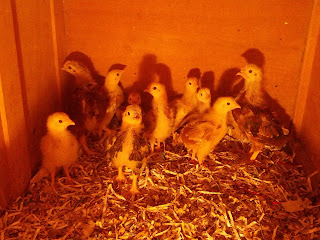 On the subject or our young pullets, we are still waiting for them to begin lay... Only the one (of the two remaining) Old English Game cross has laid, and had done so for a few weeks, prior to the last batch of rain.  Though they are a few weeks older than the others. Our Rhode Island Red crosses and Light Sussex and Sussex cross should have all begun by now, as they are over 6 months old. So I am hopeful it has just been the heat and rain that has postponed their starting. As we have had to buy eggs for the first time in years- free range, of course. I know patience is key, but I would be grateful if anyone had any suggestions.
In more happy poultry news, our Indian game and OEG x Indian game chicks are doing really well. And are in that awkward, not quite cute stage now, where they are developing their adult feathers... I think it safe to say the older 3 are all roosters! And Lucky-Lu (Lucy) is doing really well. 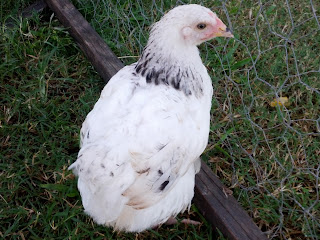 She responds to us, and comes (generally) when called. As, as only surviving Light Sussex from the chicks hatched over Christmas, where the others surcome to the wet. She battled on and survived! So is still housed in the shed, claiming the one side of the brooder box as her own. Something that will have to change once the turkeys hatch I guess. But we take her out and place her in the run every day, and bring her in at night, or poor weather.  She actually looks for us in the evenings and happily sits on our hand or shoulder... although this has resulted in a few clothes changes! She even managed to aim for the Madog's head one evening too.
This evening I planted out a few herbs, zucchinis and cucumbers to fast track my garden. As, as you may have noticed we have been a little busy and I am so far behind with starting this year's garden! I also sown my first batch of seeds... so fingers crossed for a good start. I do not tend to have a great history with propagating from seeds. I think I get too enthusiastic and plant them out too early. Ironically one of my best propagation strategies has been separating off section of the pig pen. So if I collect seeds; from garden or claimed from veg from the grocers, I generally feed some to the pigs, particularly if I am planning on allowing part of the pen some recovery time. As they appear to have a higher success rate than I do!  - 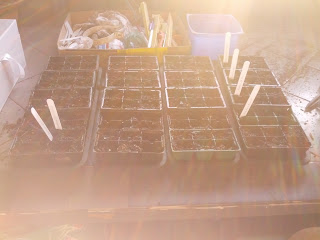 So gardening tip, should you wish to start some veg for minimum cost. If you buy your vegetables from a grocer, local produce store or farmers market, they are less likely to be produce from hybrid plant- unlike most supermarket stuff. So if you collect the seeds, they should propagate. Also if you can buy them locally, they are more likely to be successful in your environment. So stuff like tomatoes (you just need one from a punnet), seeds from a capsicum/pepper, chillies, eggplant/aubergines, pumpkins, melons, avocado (though these can be tricky, and be aware the tree and avocado skins are poisonous to almost everything, animal wise). Pretty much anything that would have seeds that you generally discard. I am also told you can place the stems of herbs (such as basil) in water and they will develop roots- this is something I plan on trying shortly... so will document and share. Also celery ends (the root bit) can be placed in water and should begin to grow again- but this is useless in the tropics. Another one that I am planning this winter is potatoes and sweet potatoes that are 'over' in the eating sense. So have eyes on them. Plant that in a barrel and 1 kg should produce up to 7kg! So again, this is another one I will keep you up to date on.
Posted by maesydelyn.qld@gmail.com at 9:25:00 am