Friday and Saturday was successful in ‘downsizing’ of the flock. We sold six Muscovy hens to a lady who had travelled over 120km (approx 75 miles) for them- this included 3 of our original girls and 3 youngsters. I was very apprehensive about letting our proven Mums go, particularly the coloured ones. Though we kept our Merle girl and a white hen, I just have to be happy in the knowledge the other 3 girls were going to a great home, with acres to roam and graze and their own dam!
They must be happy there,as the lady sent me a photo of them swimming in a paddling pool in the “quarantine pen” (always a good idea, though am sure not necessary with our girls- but I do the same, you can never be too careful)and another of an egg. We had been getting an egg a day, and duck will not lay, if they do not feel safe and happy.
Friday evening we did take a backwards step in our ‘downsizing’, though really I didn’t mind. As we bought 2 Mammoth Muscovy hens. Matt has had his eye on these giant versions of the breed since we saw a Mammoth drake at the local show last year. But I guess we sold more girls than intended, so a new bloodline was a welcome and we could afford to home a few more. These girls are younger than our own, though they were almost or as large already. So I guess we will keep you updated on the differences.
Saturday another 3 made their way to a new home. This one wasn’t so far, but 2 girls and a drake were on their way to their new family; leaving us with just one boy to go.
We also added a few more Indian Game eggs and some Indian Game crossed Old English game (cross) to the incubator. It has already been running for a week and a half; these we candled at the weekend and only a few were inactive or appeared to have not developed any further; So fingers crossed for future Indian Game and meat bird flock. As, as my Bamp (grandfather) used to say ‘don’t count your chickens, before they hatched’.
Adding to the incubator at the moment is probably a little presumptuous of us. As we are going to have to rely on our house sitter to continue to turn the eggs and monitor the water levels in our absence. However you have to take advantage of Indian Game’s laying, as they are not very productive birds, and tend to go through laying frenzies and then months of nothing.
﻿ ﻿
In Turkey news, we had another 2 eggs from our new arrivals this week; ﻿﻿though they are yet to nest in a suitable location. This week’s first, as with last week’s, was laid in the open run. The second in the hens nesting box! Had they laid in the nesting boxes in the large silver poultry shed I’d have left them there. But I still cannot quite understand how the turkey even made into the small hen hutch, let alone laid an egg in the nesting box at the back! Leaving her nest there would stress and inconvenience the chickens too much.  So I have taken the eggs and placed them in the incubator with the other eggs... so fingers crossed. 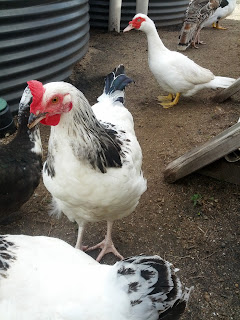 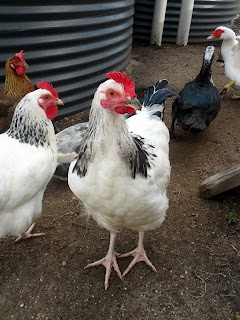 Speaking of new arrivals, I also wanted to take this opportunity to introduce our very friendly and photogenic roo; who is yet t be named.
He is still pretty young, however he is very inquisitive. And I think as he was raised by a family with very ‘hands on’ children, he is very used to being handled; something I have been going out of my way to encourage and reward. He was been very responsive to bribery in the form of chicken pellets, though he has not had any trouble claiming his share in the pen.
Posted by maesydelyn.qld@gmail.com at 12:15:00 pm