This little piggy was castrated? 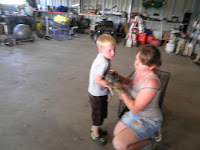 Well its been a busy few week and I know I have been AWOL. Mostly due to entertaining our visitors, but we have had a few things that should be discussed.

As I have managed to post our piglets are doing really well, and growing fast! The little girl and (possibly) the ginger one have homes. And as we’re planning on keeping “Berky” the white faced male, we just have the 2 black males still for sale. This in itself did provide a problem… castration. As I mentioned we are keeping “Berky”, and even though I have named him, he is intended for pork. However we didn’t “nut” him, as he was ours and personally I don’t believe “bore taint” affects the meat, most are killed for meat before they are mature anyway. So I see it as an unnecessary process. But for our bores to be “saleable” the others needed “nutting“.

Initially we caught the piglets using a landing net. This allowed us to remove them from the pen; and Mum, with little distress. She was not so stress free when I returned her piglets to her, minus a few bits! 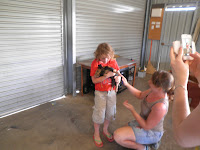 We did use this opportunity to let our visitors hold the piglets.

After this we called in assistance. I am afraid I could not hold the piglets steady enough for Matt to perform the “surgery”; some thing he was not too confident in either. So our friend came to help. He said he had performed this, but on older animals. However our research indicated the younger the better. The main thing I want to stress is that all the boys are well and recovered exceptionally quickly! Some Matt said would have taken him far longer to get over.

Part of the reason for “nutting” the piglets younger was so their recovery could be assisted by them suckling. As the saying goes “breast is best” this accounts for animals too. Although as I mentioned I don't really understand the "reason" for doing it at all.

Well its been a busy 2 weeks! My family have now been here 10 days, and yes we’re even still talking ;)

But in the time they have been here we have seen 7 new arrivals.  Which I was so excited to share with them, especially my six year old nephew. His favourites so far are the  2 chicks; Wellsumer-Sussex crosses, so gorgous fluffy yellow balls. From our stint of changing over of our roosters, for our not so successful meat bird program. Ronnie just is not quick enough, or have the dominance over the laying flock. He impatiently watched the eggs all week and was in ore as they hatched, desperate for them to dry enough to hold. He then helped build their nest in the brooder box and set up the lamp. He now checks on them daily.

The incubator is still full and we are counting down to our next hatchlings, due this weekend. 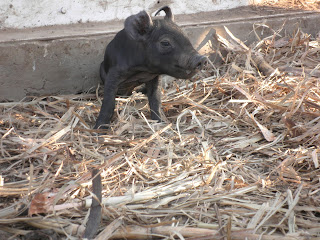 More exciting (for me at least), was the arrival of our 5 piglets on Thursday (four boys and one girl). All are fit and healthy and feeding well. Our sow delivered all naturally, on her own. As they were not there when I fed them in the morning, but were happily snuggled up in the shed in the evening. And in fairness she has been a very attentive Mum, but not too aggressive. 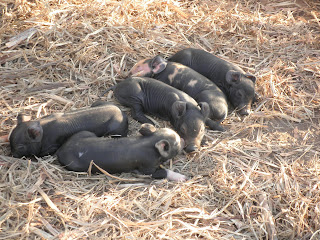 Even my sister who is (a self confessed) “not an animal person” was excited by their arrival. I think the novelty has warn off slightly with my nephew, as he has not yet been able to get close enough to hold one. Something that we will hopefully get to do this weekend, before we have to castrate the males that are for sale (we are not “nutting” our own bore). I say I hope he can hold them then, as I have a feeling Mum will not be so relaxed about letting me in the pen afterwards.

I will try and post about our success with this process soon. Especially as it is a first for us too. Though a friend (who has some experience) has agreed to lend a hand. 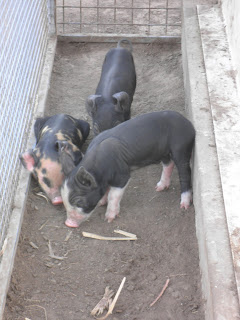 Also this weekend is D-day for the turkeys ready for Christmas dinner. Which in itself had raised a few interesting conversations with my nephew. As whilst my sister or parents have not hidden the facts of where meat comes from, I guess he has never really been confronted with the direct association. But he appears to be taking it all in his stride. Even asking me to put the rooster in the pot, as he had kicked and scratched his arm.
Posted by maesydelyn.qld@gmail.com at 7:52:00 am No comments:

Still no piglets so far. She's now looking as if she's ready to feed. So hopefully we'll have piglets soon

OK so it has been pretty hectic here, though we haven’t got around to half of the things I had hoped to blog about! We have had a ‘heat wave’ it officially reached 34 degrees (here on the coast, it was higher inland). Which doesn’t sound that hot, but when you consider the humidity is about 90%... it hot! So many of the jobs I had intended to get done are less than appealing during the day. And morning and evenings are very short. And as for rain, we had a thunder storm Tuesday, that was more of a light show than anything- 1mm of rain!
I have begun weeding, I at least have the path done and looking neat, just the herb garden, landscape gardens and veggie patch to do (probably early tomorrow). I did however start some seedlings, and they are doing quite well in the shed. I just hope I have more success when transferring them, than I have in the past.
Today is actually my last day at work for 2012, though Matt doesn’t break up for a few weeks. I must admit it feels weird, but as my family arrive in 3 days, I will be grateful for the extra time to get all the things done that I had hoped to in the past few weeks- nothing like organisation! I haven’t even posted my cards and gifts for those who are not coming... just hope the make it in time!
My family actually leave their homes tomorrow, even though they arrive here Sunday. I admit it’s a long trip- not something I look forward to. But I am looking forward to seeing them!
For those who have been following, we have been counting down to another arrival, due shortly. So penning off the pregnant sow, was not a job we could put off any further. So last night we built  a pen around their main shed.  I am just wondering how much trouble she will be, as she has never been an easy animal. And pigs are social, we wouldn’t have done it unless we felt it was necessary- we penned her off for her own health and that of her impending litter. We had hoped she would have started farrowing and we would have just built the pen around her chosen nest. But as with everything else since we have had this one, nothing come naturally. So we have used the main shed, and she has her own water tank... but she was not happy. See whether it is all still standing by the time I get home from work!
Another issue we had prior to my family’s arrival, was our ever increasing flock. We did process our roosters and a few ducks last weekend, so our freezer is looking rather full now; in preparation for the extra mouths. Although we also acquired 2 more Rhode Island crosses from a friend of a friend. They were from the batch we hatched for the initial friend.
Unfortunately we have also ‘lost’ a few others. I found one duckling tangled in some of the fencing- as they wander where veer they feel. It couldn’t have been there long, but apparently it was long enough for it to die- think it broke its neck. Another just vanished last week, so we are now down to 8.  I know we had intension of reducing our numbers, but this was not what we had in mind.
On the opposite vein, we had limited success with crossing our Indian Game rooster without laying stock. After a week we candled the eggs in the incubator all of the other rooster over the few hens appear fertile; whereas Ronnie only appears to have had success with one. I just don’t think he has the dominance or the speed and agility. So we have put in another batch from Rocky (our Sussex rooster), now he is back with his girls. Mainly as I wanted chicks whilst my nephew was here, we also had a few duck eggs, so they went in too... so we will check them this weekend.
Posted by maesydelyn.qld@gmail.com at 10:32:00 am No comments: