The past week has been quite an interesting, and unexpectedly busy one. So not a lot of time for 'farming' as such. I always put inverted commas around the term, as I do not really consider what we do as farming. I always think of farming as being commercial- I suppose farming to me means production (free range or otherwise) on a large scale and as a means of an income. Yet I suppose on many other levels what we do is pretty much the same, just smaller scale and probably a little more diverse. As we do not 'farm' one thing.  I always think the term small holder is more appropriate, but then 'smallholding' doesn't quite have the same ring...

Anyway, I had a surprise call in the middle of the week. My uni house mate has been travelling around Oz for over a year. And was in the area, and wanted to catch up. Fortunately I could move my day off around and then next day he arrived. So between this and our plans for night fishing over the weekend, much of my gardening plans were put on hold for another week.
Well he arrived the next day, funnily he commented that he had wondered if I had changed, or whether we would still get on, or still have anything in common (after about 8 years since we shared a flat- with 5 others). Strangely enough, the
thought hadn't even crossed my mind, apparently I haven't changed at all... maybe a little more relaxed.
I was just excited to see how he was, and hear about his adventures.

We all  had dinner that evening, one of our chickens (obviously) which I was hesitant to tell him- initially, as I remembered him being quite finicky with his food (though that was some time ago). Though he was fine, actually asked- many are afraid of the answer, so would rather not know. But to be honest I was surprised by his interest in our 'lifestyle' and my passion for ethically sourced foods and knowing where or how you food is produced.
I did give him a whirl wind tour of Mackay. Mackay is a beautiful spot and there is plenty to do, but not necessarily in one day. And I suppose much of Queensland offers beaches, islands rainforests and lagoons. And given he has been on Oz for so long and had spent time in Cairns and sailing the Whitsundays I guess he had seen  much of it before. But he was asked, as was another friend of ours who came to visit-why are you getting off there? I guess despite its potential Mackay is not known as a tourist hub.
This was not an issue as he seemed far more interested in reminiscing over a few beers; find out who we were still in touch with and who was where and doing what.  But more
so in our place, the animals and our lifestyle and lives now. Asking many questions about our stock, even how much of it we had set up since moving in? Or what was there before? Particularly the pigs housing and watering systems, which I proudly admitted we put in. And our ever expanding flock. 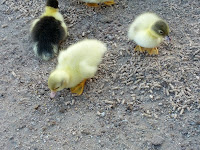 He was very kind in saying he thought we had a pretty professional set up. A complement I am happy to accept. As since being in Oz he had undertaken a few farm 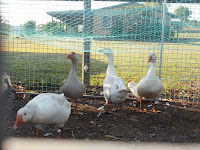 based jobs- one of the ways you can extend a holiday working visa from 12 months to 2 years. So has probably had an insight into more practicing farms than we have. From which he now has an aversion to capsicums and zucchinis (peppers and courgettes)... so I didn't pick any whilst he was there! 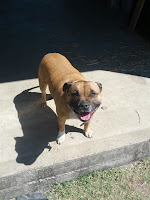 I must admit it was also good preactice for the dogs to have someone else in the house. As we have a houseful coming at Christmas, thankfully our guest was alright with dogs!
The evening he left we had a venison korma with dhal and rice. Being an Englishman overseas I thought he would appreciate this, even if I waited until after he had eaten it to let him in on what the meat content actually was. 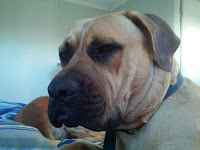 The dhal recipe was from the river cottage veg book- and was surprisingly simple. Simply bring redlentils to the boil and add tumeric, then simmer, until it reaches a soupy consistancy.Heat some ground cumin seeds in tsp of oil and them add sliced onion, til soft and then stir through the lentil mush and serve.
And off he went back on the bus and on with his trip... So nice to see you and have a safe trip.
Posted by maesydelyn.qld@gmail.com at 1:34:00 pm