This weekend we went night fishing, well red-clawing for the first time. Red claw are a fresh water crayfish and are often referred to as a pest. But they are surprisingly good eating, for something that lives in fresh water.
We have eaten them at a friends, and Matt had been introduced to the method of catching them on his recent camping, boys week away in the Cape of Carpentaria. And having bought the gear has been keen to try it for ourselves since. You may have read in Madog’s first boat trip, that we unsuccessfully dropped a few pots. This may have been due to the lake not being renowned for them, or due to the time of day we pulled them in. Or maybe it was because they were all new, and the red claw coul dsmell them... or maybe these are all fishermans tails.
However this time we drove a couple of hours to a fair sized lake, that is supposed to be "ok" for redclaw. Not the 'best  stop', but then no fisherman gives away thier best stop.
So we prepped and dropped the pots before dark. Bait being a combination of dog biscuits, cat food and melon... strange creatures!
The theory was we would pull them in about 8-9pm; if we had, had any interest then we would drop them again and stay, if not we could be home, in our own bed by mid-night.
Our pots are not flash- in accorandance with Queensland freshwater laws we each had 4 pots (so 8 in total) as we both have a fresh water fishing permit- necessary for all freshwater fishing in Queensland: These are pretty easy to collect, we applied and paid for ours at our local Tackle world store, think it was about $60 for a family permit, this lasts a year.
Our pots were the small collapsible kind and tied to our floats by a few meters of rope. Our floats were made from a woggle (or swimming noodle- whatever you call them), wrapped in hi-vis reflective tape and with our name and address written in permenant marker (again as per Qld rules- each state, country would be different). 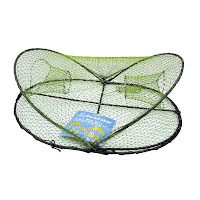 But we got one! (well a few) I must admit, night fishing is not that easy. Head lamps are a great help, if you have them. We have one, which Matt used as he needed his hands free to drive the boat. I on the other hand was juggling a dolphin torch- bright, but not the most helpful in this situation... May need to invest in another headlamp, especially if this is to become a regular trip.
Also finding the pots in the dark is a challenge in itself- we had wrapped reflective strips around our floats and this was still difficult. So note to anyone attempting this, this is a necessity to finding your pots in the dark. And so is placing them in a line- makes them easier to pick/drop without having to loop around or find that you have re-checked the same pot by mistake and that you are missing 1 or 2.
After finding our missing pots, following quite some time driving around in the darkness, and having had some success, with a few red claw and a few prawns landed. We realigned our pots, bought in the boat and set up the swag, time to get some sleep before an early start.
Note to self, when packing the swag in future- make sure we pack pillows and blankets! It was a beautiful clear night and to be honest I had never realsied that the moon rises twice? But some sleep would have been nice... I am honest in the fact that I do not operate very well without sufficient sleep.
I also wish I had taken the camera. But then I didn't take my phone out either, as I was affraid of dropping it or losing it in the darkness. Especially as I was juggling enough already. So if I had I probably wouldn't have used it. 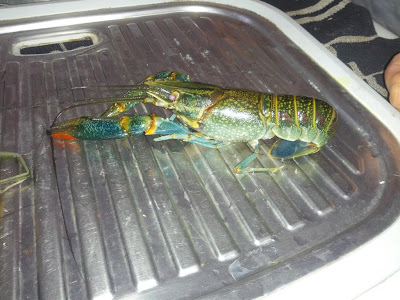 With our minimal sleep, on our clothes and under towels (these we remembered), we were up and launched the boat just before day break .
Finding the pots at dawn was far easier. When we pulled in all our pots we hadn't a haul, but more than enough for a feed and to make our first attempt a success. We even managed to pull the boat in before the rush for the early morning boaties, making it home in time for breakfast. Even if I did sleep almost the whole journey home- sorry Matt.
Red claw are cooked similar to prawns. A few minutes in boiling water til pick, then dipped in ice cold water. Preparation involves removing the head and the centre flipper on the tail, to devein much like a prawn . Shell once cooked (can be served in their shell). Press along the length of the tail, you will hear a crack, and then peel back. The meat in the claws is also good, if you catch them large enough, again crack and peel back, much like a crab or lobster claw.
So not exactly a "free meal" but definietely well worth the trip. Hopefully we will get better at it and net a few more before our visitors come.
Posted by maesydelyn.qld@gmail.com at 12:18:00 pm