Sorry this is not a recipe for Chicken Kievs, though that may come in time. What I wanted to discuss was last nights Jimmy and the Giant Supermarket. I know I have mentioned this series before, as it aired in Australia that week. And begun with rose veal. I must admit I read the best tweet the other day, where a lady asked if anyone had tried rose veal and to put in perspective (in terms of misconceptions), she added "its just like eating lamb". But back to the keivs'.
The series ended last night with the ‘reinvention’ of the cheap chicken Kiev. I have to admit I was quite impressed with Jimmy's passion. Even if I wasn't too impressed with Tescos buyers. But in fairness they kept to thier word and bothe the kiev and a re-worked version of the sausage made it to stores. (Let's just hope the rose veal makes it too). So Woolworths, Coles this can be done- take notes!
The keiv was probably his most successful product- both in terms of early sales and in meeting the Tesco expectations, as he found a meat source that was cheaper than their commercially bred broilers.
Majority of commercial producers use purpose bred ‘broilers’; a selectively bred Ross cob chicken. I myself have purchased these birds from a hatchery (via a middle man) in the past. I posted at the time of my concerns regarding their development and quality of life... I would not have them again.
As these birds, even when free ranged put on weight at such a rate that their bodies struggle to support. They are lethargic and do not scratch, or do anything normal chicken do; guess this is what makes them ideal for mass production. They will feed day and night, if they are allowed. We took the food away from ours at night, probably why ours grew to about 8-12 weeks, where commercial birds take half that. By this time we had to kill them, as their quality of life was suffering... we even had to provide them with a new shelter, as they could not climb even the smallest ramp.
Jimmy’s cheap chicken was actually chickens! “Spent hens”, now I am not a fan of this term, but it is a reality that hens raised in the most ethical environments have an expiry date. This is true of battery farmed hens too, but these would not be in any condition to be sold as meat and are often sold for other purposes. The lucky are sold as ‘recue hens’, something I am in two minds about. As whilst the animal deserves a chance of a good life, by purchasing their ‘waste product’ you would be financially enabling them to continue... but this is off topic.
It is true, and I have heard others who breed chickens discuss it in the past that a hen’s prime for laying is its first year. As they do not lay until they are 5 months old. Most commercial and many domestic birds will become surplus to requirements at 18months of age. This may seem a little harsh, but by this time they have served their purpose and are no longer financially viable to support and will be dispatched, one way or another.  So I guess a cheap alternative free range meat is a good outcome. I guess there is a stigma about older chickens being considered ‘tough’. Though in the instance of the Kiev the firmer meat was an advantage and the age increased its flavour. I guess it is just a case of using them for the right purpose. They may not be as desirable for a Sunday Roast, but are ideal for mincing or slow cooking. So why do we breed young birds for these purposes?
This got me thinking about our own birds. We have a few older birds, we still have 4 of our ‘originals’ (we had 3 Rhode Island Red crosses, followed by an Australorp, Light Susse and a Welsummer- we no longer have the Australorp or whitest of our 3 RIR x’s) and we have agreed that these ladies have earned their keep and will live out their days here; guess we think of them more as pets than livestock.
﻿ ﻿
They still produce eggs; they are just more temperamental when it comes to cooler weather, or the wet. We currently have our Welsummer in the front yard; keeping Rocky and our Indian Game hen company whilst Ronnie enjoys some time with the rest of the flock. And I have collected 3 eggs from her in the past week. So whilst her laying has slowed and is more than sufficient for the home kitchen, it would not be viable for commercial hatcheries. But I have to be realistic, we cannot keep raising new birds to maintain our egg supply and feed the older birds too. 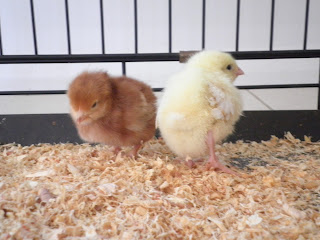 We have four ‘commercial layers’ (Australorp crosses) bred for their egg producing qualities and a Rhode Island Red bought as day old chicks last July/August. And I have been told the commercial birds will slow up more dramatically than our other breeds/ crosses too. So I guess I have to be realistic that the pullets we have to replace them, will replace them.
They are lovely birds, but I am not emotionally attached to them in the same way we are with the ‘originals’. And with a current poultry count of 61 birds (between geese, turkeys. ducks, ducklings, chickens, pullets and roosters) we have to be realistic, this not a number we will be able to maintain. So whilst some were bred ‘for the pot’ and I have reconciled myself with the fact they have had a far better and longer life than they would have elsewhere. I guess my next emotional challenge is to accept that some of our hens will eventually (and probably in the not too distant future) reach the end of their prime and may themselves be destined for the Kiev.