I know I have said this before, but it is true so I am saying it again- PIGS ARE VANDALS!
Yesterday we finally addressed the issue of their shed. Just after the new year we bought a shed (with a voucher we had been given), concreted a raised slab to secure it to, so come the next rain they could be high and dry. Since then they have bashed into it, rubbed up against it and generally tore it apart.
We had been meaning to do this job for the last few weekends. However Saturday evening the pigs made the decision for us by escalating their priority. As usual they had informed us they were low on water, by knocking the waterer over. So after picking it back up and re-filling it, there must have been some dirt blocking the drinking nipple. So in a tantrum they lifted the full waterer and knocked it over. It just goes to show how strong these animals are! 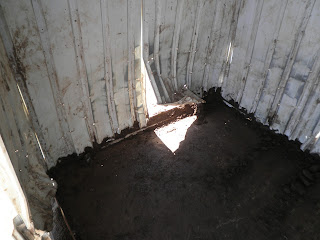 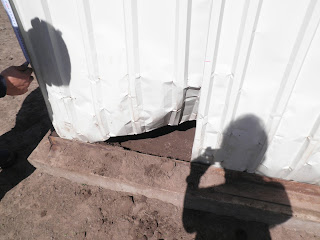 So Sunday we fenced the pigs into the other side of the paddock- much to their protest.  And set about fixing both. 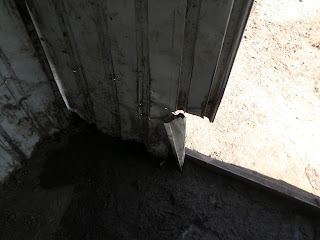 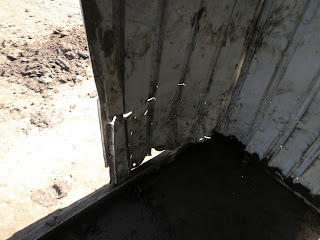 So I cleaned out the shed, shovelling out and remaining hay and dirt. Then Matt removed all the 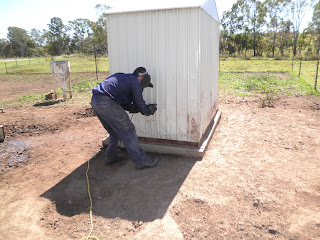 blots, replaced and/ or tightened all the screws and then cut the shed just above the worst of the damage. We then lifted the good section off and destroyed and removed the rest. 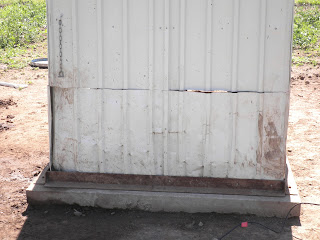 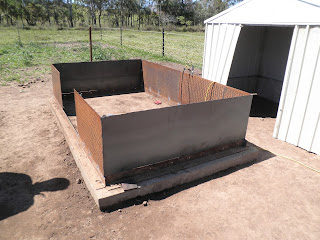 He then welded on a 400mm bash barrier, reinforcing the sheds outer skin. We are hoping this will prevent them from damaging the shed from the outside and limit how much movement it has from the inside. We then painted this and lifted the remaining shed back in. Securing it with blots both to the angle iron attached to the base and to the protective barrier.
Hopefully this should make it last a bit longer. 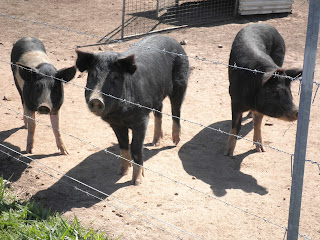 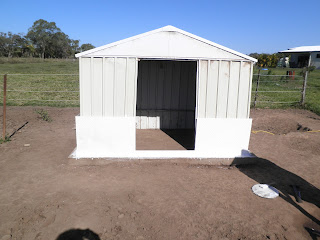 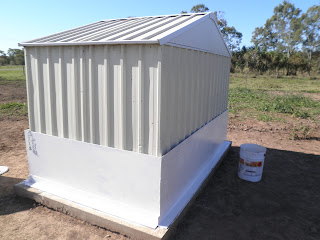 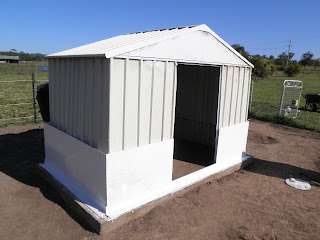 We waterer also needed so TLC, as they split it when they knocked it over. It has taken a few knocks so it was going to hapen eventually. So we will see how long it lasts this time. I try and fill it daily at the moment, as they have damaged the nipple on the second tank, so means it goes down alot faster. But if it doesn't flow fast enough or there's not enough water to weight it down, they are powerful.
I also took to clearing the turf from around my newly planted and existing fruit trees. I read that the root systems are not very compatible. So that you should give a foots grace (30cm diameter) for every year.   I’m not sure I quite cleared that far around the established trees. Though I was more concerned about ensuring the new trees established good roots, so sort of did the older trees for consistency. Until my weeding tool came off second best to the long grass and tree trunks of our unidentified ‘fruit tree’ that refuse to be separated. 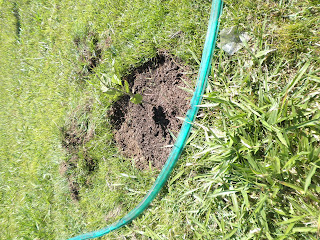 I only found 1 cumquat tree, which was disappointing as I had bought 2, which turned out to be 3. I don’t know if Madog got a bit jealous of the attention I was paying to the garden and not him, as he bit the top off one of the cherry trees as soon as my back was turned. Although he does like the fallen palm leaves and has chewed one of the little trees from the feature garden (that was already there), so this is something I am going to have to watch. I may need to find a way of protecting them from him. I was really happy to find the pomegranate tree I had planted. I did think this was lost, but it had been hiding in the longer grasses along the enviro system hoses- it’s really obvious where they run at this time of year.
So today I am off to buy some fertiliser and mulch on my lunch break and this evening I still have to find and dig around the trees outside the fence line (since Matt bent all the folks back on my weeder).  Hopefully we can grow some happy and healthy trees.