Sunday has been a poultry day all round. 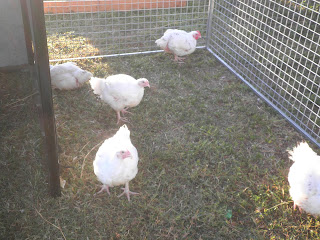 First thing we culled and skinned the last of our “Meatbirds”. These were a replacement batch from the hatchery of specifically developed “Ross cobs” (originally a Scottish breed- though these were a New Zealand version). These birds are commercially used for “meat birds”. And whilst they fulfil their purpose (and currently stock our freezer, along with the one roasting in the oven). I have some issue with their lack of chook instincts. At 12 weeks of age these birds were probably older than any we have raised (of this breed) for the table in the past. Mostly as this time around we regularly removed the food and tried to encourage them to scratch and graze- normal chook behaviours.
As commercial poultry these birds would have access to food day and night and be kept in a lit shed, meaning they wopould quite contently sit and feed constantly. Ans as a result are ready for the supermarket shelves in 40 days- ½ the time of ours.
Although I have to be honest, whilst I am always sad to see an animal go. And I know that is what they were bred and raised for- something I reconsile myself with as I know that their life (however short) was probably better for being here. If we had of kept these monsters they would not have been long for this world and it would have been cruel- as their quality of life was dwindling and would probably have died due to the stress on their bodies from their size alone.

But these final birds does mark the beginning of our own “meat birds” (think I prefer the term “table birds”)- A cross between game and dual purpose layers. Hopefully these will be able to free range happily and hopefully be more chook-like.

Today also saw the arrival, and passing of some ducklings. The ill fated batch from the borrowed incubator. As a result this will be returning to its owners by the end of the week.
At present we have one running around contently in the brooder box with the Rhodie red crosses and the 2 w/o duckling with the bad leg. We are waiting on 3, that have pipped and unfortunately the first to pip, struggled to break free. And even with assistance it had begun to dry out, inside the egg and much of it was stuck to the egg or itself. It just didn’t have to strength to survive. So from 20, so far only 5 have had any signs of life. Maybe the settings of the incubator in those early stages were just too high and had already done the damage.

And then this weekend was the annual Sarina Show, so having dropped Rockie and Ronnie off for their Show debuts bright and early yesterday morning.

We collected them lunch time today. Both had placed (3rd & 2nd) in their respective classes. Even if I did (unintentionally) enter them both as “cocks”- so they were competing against fully fledged roosters (nothing else). As opposed to the “cockerels” that they should have been, which are birds under 12 months. The confusion lay as I understood cockerels to be a young male, as “pullets” are young females. Only once a female is laying (usually 18-22 weeks), I thought they were then “layers“ or “hens“. And by association young males become “cocks” or roosters once they are crowing and working.

But apparently not, guess as the saying goes "you learn something new everyday". So considering they were being compared to fully grown birds, they did very well. But I have to admit this is an experience neither of us are too keen to repeat. Whilst I entered them as a bit of fun, fun was the last thing it seemed for our birds. It was stressful, and clearly something they were neither used to, or comfortable with- confinement. That is without the stress caused by catching them (and to me and the scratches I sustained as a result), as well as transporting them there and back. Whilst this seems a regular thing for many of those locally who keep birds (as well as all around Oz and at home). I guess it just wasn’t for us, I’m happier watching our birds roam, and being birds.
Posted by maesydelyn.qld@gmail.com at 5:21:00 pm