Well the search for a tinny continues, but I'm rather excited by this evenings viewing. Fingers crossed it’s on good nick, unlike most of those we’ve seen so far. Especially since it will be a 250km round trip to see it... am not sure about the name either. 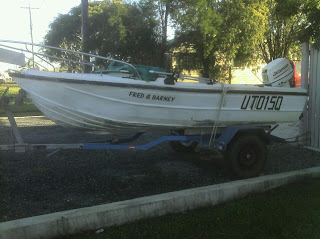 The idea that I am searching for a smaller boat is probably more amusing when you consider I suffer from seasickness. Not so much on larger vessels, but smaller crafts and/or rough seas and in Matt's words I'm a "gone-a".
Now don't get me wrong this is not a flash new boat, the hull is nearly ass old as me, though the trailer and the motor are quite a bit younger. But this fulfils a promise I made to Matt when we bought this place. I said we'd (hopefully) be able to buy a (reasonably priced) tinny by the end of this year to compensate for his loss. As a tinny would be more practical than a bigger vessel; such as the one we sold to buy this place.
One of the appeals of living in North Queensland is the barrier reef and the amazing fish varieties and clear waters. So not surprisingly the Mackay Region has one of the largest boat ownership rates per capita in Australia. And was one of our more "extravagant purchases" since living here. Not in that it was pricey or flash and as I have pointed out around here it's not really "extravagant", as everyman and his dog has one (of some size or description)... it's part of the lifestyle. I guess it's just extravagant in that it's not a necessity. I guess before moving here I would never have thought of owning a boat, or of myself as fisherman but now I think I would find one anywhere. Just for the experiences, let alone the freshest, free food!
Our previous boat was a 20 year old cuddy cab, but she was neat and served us well; enjoying many sunny days on the sea, fishing, snorkelling etc. Even with my seasickness; which I wasn't aware I suffered from until we bought her.  But Matt made the ultimate sacrifice to buy this place. So this is something I have aimed to repay.
Now a tinny by definition is not a cuddy cab, but a boat like the old one would not be as practical where we are. Here there are amazing creeks and small boat ramps, perfect for a smaller craft and for fishing, prawning and crabbing.  Not that crabbing has been something we have had a great deal of success with in the past- most we had ever caught was a six pack of beer! Most would have been happy with that, but it was Gold and it would have been our first catch- am guessing it was worth while too, since they left anything at all!
﻿﻿﻿﻿ ﻿﻿﻿﻿

Will let you know how tonight’s viewing goes...fingers crossed we'll be on the water soon.
Posted by maesydelyn.qld@gmail.com at 4:00:00 pm