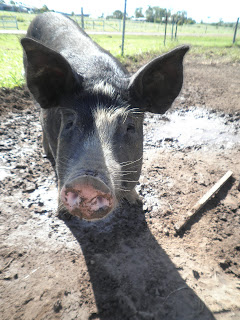 As I had sent both herself and Christine from Berkshire Gold an email hoping for some advise. As our pigs are 13 months old now and there is no signs of any action and Matt has began asking the questions "what do we do with them?" I suggested having a vet to examine both Smokey and Streaky to ensure their both in good health and productive working order. However I've been told the vets here have little to no experience with pigs. So thought Sheree and Christine would be my best form of advise (as they were the breeders we bout them from) and Smoke and Streaky's best chance. 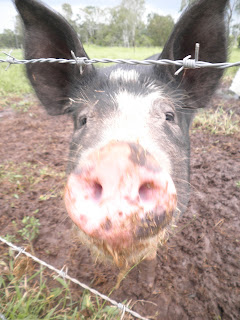 I explained to Sheree that I believed Streaky to have been in season in mid May. As she smelled different to me, and on eventually inspecting her back end (poor girl has
no privacy).
So if you’re interested in what to look for in a guilt/sow on heat- they appear swollen and sometimes slightly red. The boar was also very interested in that area (also a good sign).
Since May we have seen no signs of her being in heat, however I haven’t noticed any differences in her if she were in-pig. Or of any action between the two of them- Though I have been told pigs are private animals.
But Sheree did explain that a few of her girls showed no or only minor signs, especially on their first litters- as there were only a few piglets, so it was difficult to tell. She did explain how their teats will enlarge (ready for milk) about a week before birthing. So to just be patient, and wait and see. 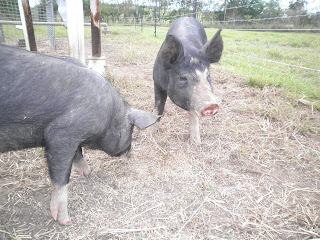 So for now our (hopefully) breeding pair have a reprieve.  I just do not want to get my hopes up too much, but must admit it is hard not too… so fingers crossed.
Posted by maesydelyn.qld@gmail.com at 12:57:00 pm

Email ThisBlogThis!Share to TwitterShare to FacebookShare to Pinterest
Labels: pigs