I made it home from work and tentatively lifted the lid of the incubator… hoping to see movement. But there had been no progress with the remaining egg. So deflated I examined the 2 that had pipped (we had held little hope for the other 4). I could just see what was a bird, but nothing. Then I picked up on the other to hear the faintest chirp and slightest movement. I know everything I have read had said not to interfere, but I had to give it a fighting chance.
So very carefully peeling small sections of shell away from the existing whole, trying to stay around the end that it should have pushed off.
There are a number of reasons for not interfering with ducklings (more so than chicks), other than the argument that if it wasn’t strong enough to make it, then its nature’s selection- survival of the fittest. As ducks remain attached to the umbilical cord for some time after breaking out. Usually staying within the shell for a few hours, which (unlike a chick) largely remains intact. Allowing for them to absorb the last of the nutrients and make their big entrance when their ready and able to free themselves from the dried cord. If you break that membrane or connection, then the bird could bleed out anyway, so you’re interference could do more harm than good. So in many respects you’re damned if you do or damned if you don’t.
But I had made my decision, probably influenced by the events of the morning. But I was giving this little one every chance. It had done the hard work, it was just weak. So after a few hours, and a little more assistance to release its leg, late last night it made its big entrance to the world.

Still weak this morning, not properly dry (probably saturated with yolk from being in the egg too long) and still attached to its egg, it remains in the incubator. I did gave it some water (using a medicine dosing syringe) and carefully located the dead tissue along the umbilical cord; this had now dried out and was no longer supplying the bird. So with precision, surgically removed it; allowing it to move more freely and hopefully gain a little strength (not dragging around the extra weight). Am hoping it will be strong enough to move into the brooder box this afternoon. I did leave it a small dish (well tuppaware lid) of water, and it was drinking and moving around. 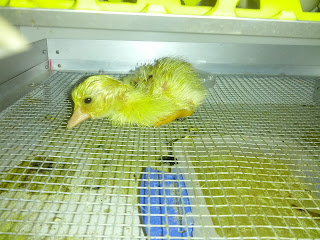 of the borrowed incubator. I will admit having a separate area for hatching, or as we’ve used it over the last few days for hatchlings has been great. As in our incubator they climb all over the remaining eggs and move them around. But in saying that, I think it’s been handy having the second area. When it comes to those eggs suspended in the trays hatching, we have to move them down to the hatching tray- so will still have the same problem. Maybe we can set ours up as a secondary drying area…

Well I’ll keep you posted on the last ones progress (fingers crossed). But the others are doing well. They’ve settled in with the chicks really well. I wish I had, had my phone on me when I checked on them yesterday afternoon as they were all curled up together sleeping… very cute! 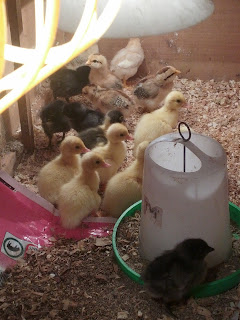 We were amazed to notice that some of the chicks (now 4-5 days old) have started to develop their feathers! I’m planning on documenting their development (especially over the first few weeks), as well as the duckling- for the future reference. Though with the chicks we no longer have their Old English Game dad, so their development may vary to future flocks, but still curious to see how they turn out. The 2 blue chick are a lovely colour, as are the lighter “stripies” with the lines at the eyes… no doubt they’ll be boys, with birds the pretty ones generally are!

On another subject the first of our trees (well thier bigger than seedlings, but I wouldn't want you to think they were fully fledges trees either) arrived yesterday! And not the order I had anticipated arriving first- this was from Forvever Seeds (Ebay store). An australian supplier specialising in rare and edible seeds and plants... So am very excited and am hoping pot them tomorrow (at least until thier more established, since these are going in the house garden and maybe subject to dog interference). So we now have Ginger (well its a plant really not a tree), Cardamom, Macadamia & Pomegranate.
Posted by maesydelyn.qld@gmail.com at 9:40:00 am