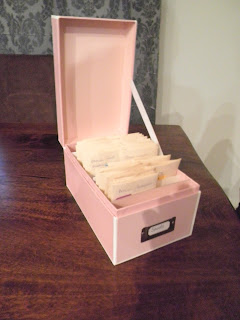 Now this may seem a little lame to some, but as a self confessed control freak I felt the only way to manage my planting (and hopefully harvesting) effectively was to get organised. And this should keep all my seeds I generate in one place too. (Instead of finding little money bags and plastic containers everywhere, and trying to guess what they were from)
So for anyone thinking about planting, this is my strategy and I guess time will be the judge, so we’ll see how it goes.
I bought a 'recipe box' from the Officeworks (a shoes box, cd box anything of that size/description would do) and a set of cheap dividers (12- one for each month). I cut the dividers down so that they fitted in the box with their tabs.
I have drawn pencil lines on the back, so I can list seeds as I add them.

I also bought 100pk of 'seed envelopes'; their apparently moisture controlled. Although most of my seeds are in sealed money/plastic bags anyway.
I then wrote the fruit/vegetable, variety and months to plant (off spec sheet and/or internet/book research) on the front, I also noted “heirloom” varieties. As these I can (hopefully) collect seeds from these plants for future planting. I will also add dates to these packets, so I can reuse them every year.
Then on the back I listed the planting instructions- row distance, depth, estimated germination and maturity times and specific notes/conditions, such as soil type, mulching, watering details, when to transplant, if need to start in pot/try etc. Also if a plant has specific companions or plants to avoid. So I know to consider these when planting out.
I then placed each packet in the next month that I will use them. So plants that will grow all year will move into each month at the end of the current one. So I placed them in July, ready for the weekend.
Whilst those that grow from February- June (for example) I placed in February and will then move into the next at the end of each of those months. 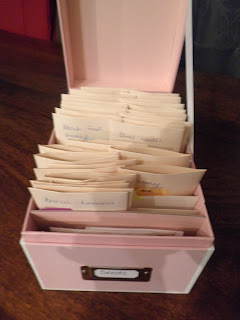 I have done this as I have 3 reasonable size raised gardens, but not an unlimited amount of space, so for the most productive use of space and planting time, I need to be organised. Also as there are only 2 of us (and animals will get a share, I sure) I try to plant appropriately; we would not use 12 lettuces at once, but if I plant 1-2 seeds each week, I will hopefully achieve a constant and consistent supply.
Also in my box are the labels that I bought from Bunnings at the weekend. As last year I mostly grew veg that I bought as seedlings. I found growing from seeds can be interesting, especially if your trying new varieties… there are a few successful plans in garden at the moment that I am not sure about the identity of! So hopefully I won’t be doing that again ;)
Well I’ll let you know how successful this is when I tackle the veggies patch/ seedling tray this weekend.
Posted by maesydelyn.qld@gmail.com at 12:42:00 pm